After a week’s hiatus for the Martin Luther King Jr. holiday, the Monday Night Basketball League resumed play on January 27 th, with the 6th Grade Clarion Bobcats taking on a team from Clarion-Limestone at Joe’s Gym. At the end of regulation it was Clarion-Limestone who had prevailed, besting the Bobcats 30-23. 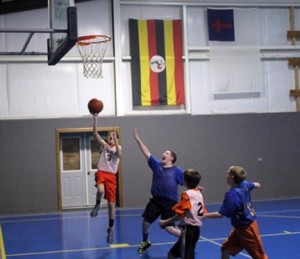 Nick Frederick in on a lay up

Clarion led after the first quarter 5-4, thanks to baskets from Nick Frederick and Bryan Andreas, combined with a Josh Craig free throw.  Frederick came on strong in the second, scoring all six of the Bobcats’ points during the frame. Clarion-Limestone’s Deion Deas hit a three pointer and Curvin Goheen scored four in the second, however, to send the game into intermission tied 11-11.

Clarion-Limestone surged ahead 21-19 during the third quarter, led by Deas’s six points and baskets from Goheen and Bowen Dame. Tyler Schmader scored four for Clarion in the third, with Nate Datko and Frederick each contributing a basket. Deas again led Clarion-Limestone in the fourth, sinking a shot beyond the arch and scoring another basket at closer range. Goheen and Kaden Park also added two points apiece for Clarion-Limestone.  The Bobcats could only muster four points on baskets by Frederick and Skylar Rhoades in opposition, falling by a final of 30-23.

Frederick led Clarion with 12 points followed by Schmader with 4. Andreas, Rhoades, and Datko added 2 points apiece and Craig ended the game with 1 for the Bobcats.  Also playing for Clarion were Robbie Andreas, Billy Huffman, Ben Murtha, and Lake Staub.

Following regulation the teams played an additional six minute quarter for fun.  Coul scored the only basket for Clarion-Limestone in the extra frame, while Craig and Datko each had four points for Clarion and Schmader contributed a bucket.

Clarion Coach Keith Murtha commented that though the Bobcats “didn’t play our best game as a team we had some highlights. We worked on some new things and they are continuing to develop. We will continue to work in practice and be back at it [next] Monday.” Murtha praised Frederick for having a “great night on both ends of the floor” and noted “that is as well as I have seen Schmader play.”

(Because this was the only game of the evening [as opposed to the usual slate of three], the coaches agreed to play using junior high clock rules. As such, halves comprised of two six minute quarters were in effect instead of the league’s usual two fifteen minute halves.)

The 6th Grade Bobcat Cagers will return to action Monday, February 3rd at 6:00.

(Thanks to Kenn Staub for this article.)