Gretchen Vandermeer, a vital member of this past season’s Lady Cat State Champion Volleyball Team will will be wearing new colors next fall, maroon and gold, after committing to play on the Salisbury University, Lady Golden Gulls, Volleyball team. The University is located in Salisbury, Maryland. 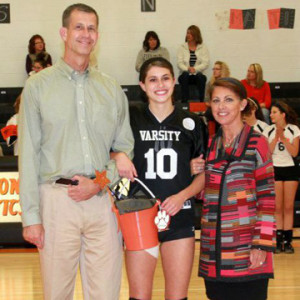 (Photos provided by the Vandermeers)
Gretchen with her parents, Dr. Dirk and Karen Vandermeer, on Senior Night

The program is guided by new Head Coach Justin Turco. The Sea Gulls compete in the NCAA Division III, Capital Athletic Conference, which also includes volleyball programs from Marymount (VA), St. Marys (MD), Mary Washington, Frostburg State, York (PA) and Wesley. They won the CAC championship, last season and were 37-4 overall. The Sea Gulls have won 8 Conference championships (1998, 2000, ‘04, ‘08, ‘09, ‘11 and ’12). They participated in the NCAA Division III Tournament each of those years. The program has produced 10 All-Americans.

Gretchen heads to Maryland with some pretty impressive credentials. She was named All-State, as a Setter, by the Pennsylvania Volleyball Coaches Association (PVCA). She was a First Team All-KSAC selection this past season and a First Team All-D9 Tournament Team selection at Outside Hitter. Gretchen had 475 points, 74 aces, an astounding 1106 assists, 85 kills, 231 digs and an 89.4 serve in percentage.

Gretchen is the daughter of Dr. Dirk and Karen Vandermeer, of Clarion.

Gretchen shared the following thoughts on her high school team, college team and family with Clarion Sports Zone and you, “As a senior, I am starting to look back on the great memories I’ve had growing up and so many of those revolve around volleyball.

“Volleyball has been a part of my life since 7th grade and it just continues to become more and more important to me. I never imagined a sport to change my life in such a significant way but volleyball has.

“I owe all of these great memories to my coaches, Shari Campbell and Erika Bevevino, as well as my amazing teammates. There is no way we would have been as successful without the love and dedication my coaches and teammates put into the program. I am so incredibly thankful to say that Coach Campbell and Bevevino were my coaches. I have learned so much from them, not only about the game, but also about how to handle life situations. 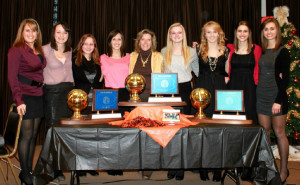 “I was also very lucky to be able to play with such a great group of girls that love the sport just as much as I do. These girls are not just my teammates but they have become my best friends.

“Although I am very sad to be leaving my high school volleyball family, I am ready to begin my career at Salisbury University. I am extremely excited to attend Salisbury in the fall. After meeting Justin Turco, the new head coach at Salisbury, I knew it was the school for me. Coach Turco, along with the girls on the team, made me feel very welcome there, which helped me choose Salisbury.

“Throughout my entire life, my family has always been exceptionally supportive of me. I am so thankful for everything they have done to help me pursue my goals with volleyball. I would not be where I am today without the constant support of my parents and I am so appreciative for that.”

Congratulations Gretchen and best wishes as you embark in this next great adventure of your life!!!!

Categories
Volleyball
Back to Top