Master of Ceremonies, “the always exciting and much sought after” Doug Klein kept things rolling as he  introduced each and every coach, director, adviser and participant in high school band, color guard, dance team and cheerleading, as well as, each varsity sport and various school officials. 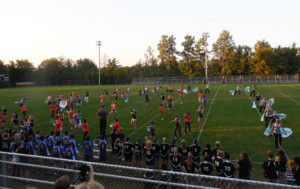 Things got underway as the “Pride of the Bobcats,” the 2013 CHS Marching Band performed some selections from their halftime show repertoire. Among the selections were “The Tide is High.” by Blondie and a big crowd pleaser, “Hey Mickey,” by Toni Basil, with the band front doing the chant. The Band members, color guard and dance team were introduced during this time.

Then Doug thanked various individuals who helped to make the night possible: Cindy Nellis who headed the event along with others of the joint Booster Committee, Chris and Amy Hockins, Scooter and Laura Miller, Deanna Sintobin, Bridget Thornton and Tracy Cherico. Doug made mention of the tireless hours of effort these individuals put in to bringing the event to fruition.

Next the varsity cheerleaders led the crowd in some cheers, with the Jr. High cheerleaders providing assistance from the bleacher steps.

Then the athletes formed a “tunnel” that stretched across the width of the field, and as each team was introduced, each individual’s name was called out and that coach or athlete ran through the “tunnel” to high fives, handshakes, chest bumps and some good natured shoving. Once through the line, each team member and coach met in the middle of the field for greetings from their teammates. 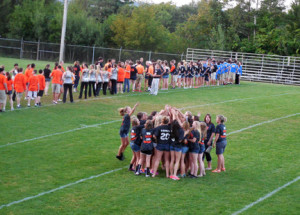 The evening ended, with athletes, coaches and fans alike, gathering at the west endzone for the lighting of the Bonfire.

Here’s to a great season for all the fall athletes and thank you to those who worked so hard on this school pride event!!!! 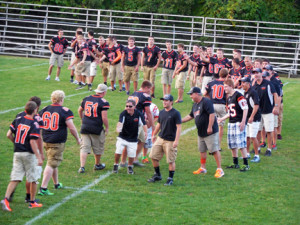