The LeFay brothers became international champions, traveling to Windsor, Ontario to capture medals in the JJM Canadian Open – Brazilian Jiu Jitsu Tournament. The tournament brought competitors from a variety of schools, drawing from both the United States and Canada. 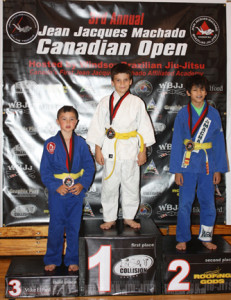 (Photo by the LeFays)
Haven on awards platform

Haven, 9, choked all of his opponents to win gold in the Gi division (while wearing the uniform) and brought home the bronze in the No-gi (no uniform) division. His brother Mike, 14, won silver in both of his divisions. Haven’s performance was so smooth and controlled it was deemed by a legend of the sport, Jean Jacques Machado, that Haven should be promoted to his next belt rank on the spot.

The LeFay brothers traveled to Canada with a small team from Clarion MMA. The school took 6 members and every member earned medals in their divisions. Perhaps even more interesting, the entire LeFay family, the boys and both parents, competed. Dad, Leo, won bronze in both of his divisions, Mom, Hillary, won a pair of silver medals.

The boys’ father and coach, Leo LeFay, says, “ I realize that not everyone wants to compete in the sport of Brazilian Jiu Jitsu, a lot of our students just want to learn self defense and self confidence. We compete so they don’t have to, they can see from us that our teachings and techniques work, even against resisting, knowledgeable opponents. They can take confidence from that.”

For more information about Clarion MMA and the classes they offer you can visit their facebook page at https://www.facebook.com/groups/132494420112703/

(Thanks for story and photos from the LeFays. Congratulations on a great showing!!!)