Bobcat Basketball History was made, on Friday night, as Roland Shannonhouse scored the 1,000th point of his outstanding career, in the Cats’ 66-60 victory at Moniteau.

Roland came into the game needing 21 points, to reach the 1,000 point plateau, a goal well within his reach, considering he has scored 20 or more points in every game but one this year. And in that game, he scored nineteen.

But… With about 6 minutes left in the game Roland had “only” fourteen points. No problem. Roland decided it was time to catch fire and score seventeen. Yes, that’s right 17 points in the last 360 seconds, or so, in the game, to finish with 31 on the night. 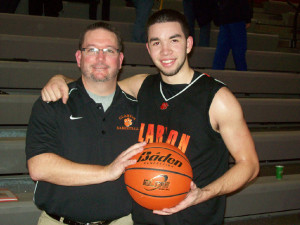 Roland’s season total now stands at 271 points and his career total at 1,010. And there is plenty of basketball left to play.

Coach Smith pointed out that the bulk of Roland’s points have come in what amounts to  roughly two seasons (the last thirteen games of his sophomore year, through his first eleven games this season), making the accomplishment more impressive.

Roland played his freshman season and two games of his sophomore season at Farrell, scoring 64 and 38 points respectively.

After transferring to Clarion, Roland only competed in 13 games in the rest of his sophomore season (2010-2011), but still scored 162 points.

As a junior, Roland scored 475 points and through eleven games, this season, he’s scored 271 points.

Roland shared his appreciation to some of those who’ve helped him in his quest. “I definitely want to thank my coach (Bobcat Coach Todd Smith), because I couldn’t have done it without him.” And of his teammates, “ I want to thank all the guys I played with and the JV team, for getting to practice against them. I definitely couldn’t do it without all the support I’ve had. I appreciate it.” 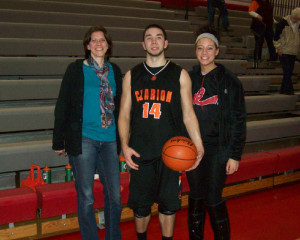 Roland closed by saying, “Basketball has been the most consistent thing I’ve always had in my life, so it’s nice to get some accomplishments with it.”

Coach Todd Smith shared his thoughts on Roland’s accomplishment and Roland as a person, “I’m just really proud of Roland because he’s worked extremely hard, over the years, to make himself a good basketball player. This is just a great accomplishment for him.

“One of the things I’m most proud of is his maturity over the last three years, since I’ve known him. I think that was one of the keys. He’s always been a talented basketball player but I think he’s grown up quite a bit into a fine young man. I’m proud of him for that.”

Congratulations to Roland on this great accomplishment.