The Clarion Bobcats held their Sixth Annual Novice/Open Tournament on Saturday and had a fine showing. Several of their wrestlers also competed on Sunday, competing in either the Greensburg Open or the Bradford Top Dog Tournament. Coaches Lee Weber and Dave Smail provided the following recap.

Our young Bobcats continue to impress us coaches over the weekend. Most of our boys placed in the top 3 positions! Those who didn’t, gave their opponents everything they can handle. 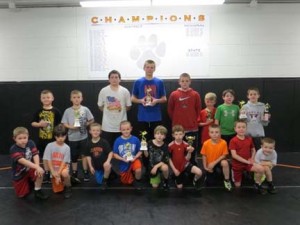 First place finishers: Brendan Makray, coming back out to the sport, wrestled with a lot of determination. Dawson Smail dominated the 9 yr. old wt. class as an 8 yr. Old. Owen Reinsel had no problems in disposing his opponents. Jake Smith bulldoze his way through his wt. class. Alex Barrett earned his first 1st place trophy by gutting through and winning all his matches.

Second place finishers: Ben Smith battled his way to the finals and finished a strong 2nd. Derek Smail and Hayden Weber battled back for 2nd after a tough earlier loss. Noah Harrison and Brady Pierce just missed winning their weight class in their close losses in the finals.

(Thanks to Coach Webber and Coach Smail for this recap. Good job wrestlers!!!!)