On Monday, February 3rd, The Clarion Jr High Basketball A-Team played its first home game of the season. The Bobcats hosted the Keystone Panthers. Clarion topped Keystone 43-30. The boys did a nice job the entire game, winning each quarter.  They came out quickly, scoring 12 points in the first quarter and 8 in the second, taking a 20-12 halftime lead. During the halftime intermission, our focus was to do a better job rebounding and to tighten up our defense. The boys did a fine job on both fronts. We out-rebounded the Panthers in the second half, limiting them to one shot, if that. 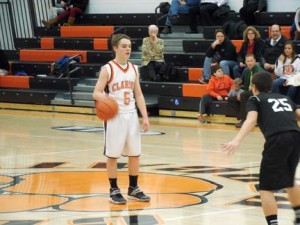 The scoring played out as follows: Cameron Craig erupted for 21 points to pace all players on the floor, including 2-3 pointers. Christian Smith, Spencer Miller, and Cam Hearst each added 6 points.  Two other boys scored two points apiece. Zach Bauer and Jacob Selker had two points each, but it was when and how those points were scored that was very important to our victory. Each scored in the 4th quarter. They both were fouled and put to the free-throw line where they knocked down both shots! This was HUGE for us! In fact, the Jr High boys as a team were 6 of 8 from the stripe in the fourth quarter. This kept the Keystone Panthers at bay in the quarter and the game.

The boys play an aggressive style of defense and are getting better with every practice and game. Nick Cherico had some great stands on “D” and did a nice job on the boards. 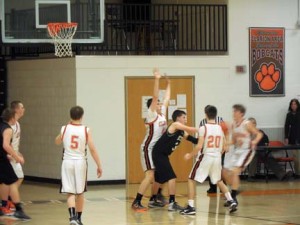 Nick Cherico – a force to be reckoned with underneath

Coming on to the floor, Zach Bauer and Austin Hummell were told specific things they needed to do. Zach was told to rebound like a “mad-man”. He did just that, grabbing the first rebound after entering the game. Austin was told to go “all out” on defense. He too, did just that! He tipped the first pass out of bounds and had a quick deflection creating a turnover and converting that into points for his team.

As a coach, this is a very nice team to work with, very ‘coachable’. Our next contest was to be with West Forest, but was canceled because of the weather. The next game for the Bobcats is Friday, February 7th.  We are able to split into three teams. The A-Team will play at the Karns City High School beginning at 4 PM. The B & C Teams will play at the Chicora Elementary School in Chicora, PA. 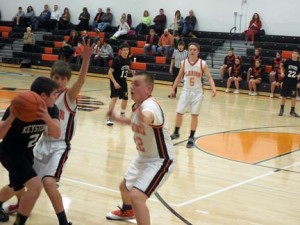 Bobcats were tough on defense all game

(Thanks to Coach Quinn for this article.)