Jon Kemmer has climbed another step on the professional baseball ladder.

The former Clarion Area Little League and Clarion Area High School baseball standout, made his debut in the outfield for the Lancaster (CA) JetHawks of the California League on Friday night (July 13th). The JetHawks are the Houston Astros’ Class A Advanced affiliate. 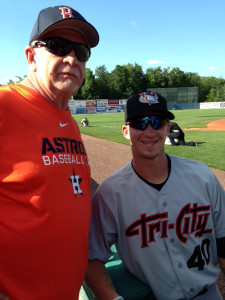 (Photo by Lori Henry)
Jon, with his father Ed, before game between Tri-City and Mahoning Valley in 2013

The visiting JetHawks defeated the Rancho Cucamonga Quakes, the San Diego Padres’ affiliate, 8-5, at LoanMart Field. Kemmer, who was added to the JetHawks roster earlier in the day,  hit a two run homer in his first at bat, to tie the game 2-2, in the second inning. He had an RBI sacrifice fly, in the fourth inning to give the JetHawks a 3-2 lead. Kemmer led off the seventh inning with a single and later scored.

On the night, Kemmer had 2 hits, including the 2-run shot, with 3 RBIs and three runs scored.

Kemmer started this season, with the Quad Cities River Bandits from Davenport (IA). The River Bandits are the Astros’ Full Season Class A affiliate. Kemmer played 52 games for the River Bandits, hitting .289, with 52 hits, including 15 doubles, a triple and four home runs. He had 17 RBIs and scored 29 runs.

Congratulations to you Jon, and all the best as you continue pursuing your dream. You make us all very proud!!!!

Categories
BaseballSpecial Feature
Back to Top