After two losses on the road, the U15 Striker team came away with a win against the second Kinzua team they have faced this season. 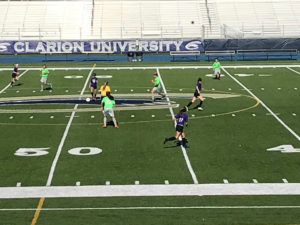 Bailee Verdill was first to get on past the Kinzua defense and into the net for a score of Strikers 1 Kinzua 0. Ashton MacKinlay was able to get the next goal in from a well-placed corner kick by Nate Megnin.

Bailee Verdill found the net,  for a second time, giving the Strikers a 3-0 lead. Joyce Kim shot past the Kinzua goalie to give the Strikers a 4-0 lead at halftime.

Kinzua came out strong after halftime.  They were able to get past the Striker defenders and goalie Tyler Bingham for their first goal of the game.

The Strikers final goal of the game came off a beautiful run from Joyce Kim to Anna Gribik to Bailee Verdill, who had a hat trick, to make the final score Strikers 5 Kinzua 1.

The Strikers are home again Sunday, October 8th, against MASCU at 4:00 at the CUP Stadium!

Categories
CRVS Soccer
Back to Top