(By CSZ Sports Writer Kenn Staub)  Bobcat wrestlers Tom Wurster and Ryley McMasters both found success at the District 9 Class AA Wrestling Tournament this past weekend (Feb, 23 and 24) in Clearfield. Wurster, Clarion’s senior 220-pounder, was runner-up in his weight class and will be making his second consecutive trip to Regionals. McMasters, also a senior, placed third in the 152-pound weight class and will be making his first appearance at the regional tournament. At Regionals, being held this weekend (March 2 and 3) in Sharon, both young men will be vying for a trip to the state championships in Hershey. 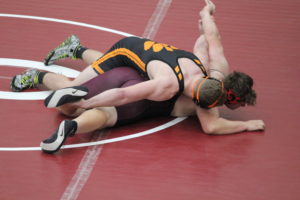 Tom Wurster works against a Cranberry wrestler (earlier in the season).

Wurster, ranked 22nd in the state, pinned his way into the semifinals, sticking both Michael Vandergrift of Oswayo Valley (1-4) and Keystone’s Nate Redding (19-8) in the first period (1:13 and 1:40, respectively). The second-seeded Wurster would face a familiar foe in the semifinals, third-seeded Aiden Gardner of Redbank Valley, who the Clarion wrestler beat 10-5 in a bruising bout a little less than two weeks ago during the penultimate match of the Bobcat’s dual meet season. The results were the same this time, a Wurster victory, though the score was much closer, 4-3. Wurster’s opponent in the finals was also no stranger, first-seeded and 7th ranked Tyler Cook of Brookville (29-5), who had downed the Bobcat grappler 3-0 at the beginning of the season. Cook, a state place winner last season, would again prevail, 7-1, to claim the district championship. Wurster, whose 2017-2018 record now stands at 26-5, will face Tyler Zebrovious of Lakeview (31-5) in his first match at Regionals. 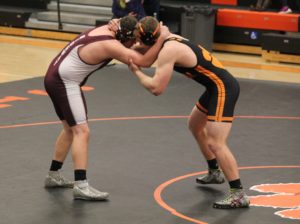 Tom Wurster locks up during the Ridgway match (earlier in the season).

Clarion Head Coach Brian Luton talked about Wurster’s performance following the tournament, saying “Tom wrestled in a dominant fashion during his first two matches, taking care of business with two quick falls. His semifinal match was a nail biter against a young but confident opponent. He lost his composure briefly but was able to pull it together and get a last second takedown to punch his ticket to the finals. In the finals Tom wrestled a little conservative the first two periods, but was also wrestling one of the better guys in the state at his weight. Being in the district finals for the second season in a row is nothing to scoff at and I’m proud of his achievement. Tom showed in the third period he can scrap with the top guys when he is mentally focused. Next week will be the real test for him and hopefully he can get himself to the state tournament.” 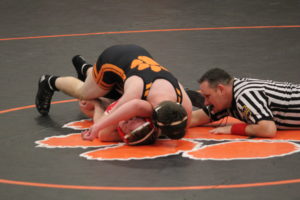 Ryley McMasters works to pin a Redbank wrestler (earlier in the season).

McMasters was the Bobcats’ “feel good” story of the tournament, as he did not enter Clarion’s line-up until the middle of January owing to a lingering lower body injury suffered prior to the 2017 district championships. Advancing to the quarterfinals after a first round bye, the fifth-seeded McMasters defeated Brockway’s Andrew Hickman (15-12), the tournament’s fourth seed, 7-5. In the semifinals McMasters lost by technical fall (17-2) to eventual champion and the 9th ranked wrestler in the state, Alec English of Kane (28-2). In the consolation semifinals McMasters took a 2-0 decision over Jacob Cable of Brookville (12-15) and then earned a 9-3 decision against second-seeded Andrew Zimmerman of Kane (23-6) for third place. McMasters, now 16-6 for the season, will take on Luciano DeRose of Titusville (32-6) in his first match at the regional tournament. 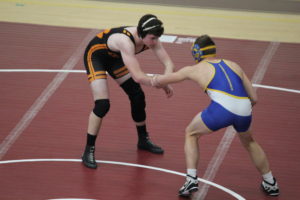 Ryley McMasters during the Johnsonburg match (earlier in the season).

“Ryley really put it all together once he was able to finally get healthy this season. He had an incredible week of practice. His attitude was exactly what you are looking for in your wrestlers going into the post season. I don’t think anyone that was around him the last few weeks was surprised by his third place finish this weekend. Ryley earned every bit of what he accomplished through hard work and determination. You could sense he just wanted it more than his opponents. That’s what this sport is all about and to see one of your wrestlers get it done is really exciting. The postseason can be an emotional time for wrestlers, their families, and coaches. It’s really exciting to see a family get to enjoy their son’s success after years of practice and traveling all over to wrestle since they were little. As a coach it’s fun to watch that unfold,” said Luton. 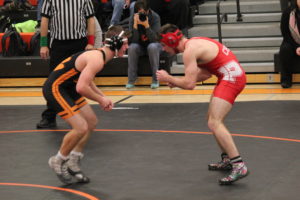 Nick Porciello during the Punxsutawney match (earlier in the season).

Junior Nick Porciello came up just one win short of punching his ticket to Regionals, being eliminated in the consolation semifinals. The 160-pounder began his tournament by pinning Redbank Valley’s Noah Anderson (3-12) in the second period (3:13), but then lost an 8-3 decision to Johnsonburg’s Isaac Zimmerman (18-13). Once on the consolation side of the bracket the fifth-seeded Porciello pinned Bryce Grecco of Brockway (5-9) and then Cameron County’s Caleb Pifer (5-5) in the second period (1:38 and 2:24, respectively). [The first period of the consolation matches is only one minute long at the District 9 tournament.] Porciello’s day came to an end when he lost an 8-3 decision to second-seeded Aiden Hulings of Kane (24-4), the 20th ranked wrestler at the weight in Pennsylvania. The first year Bobcat finishes with an 18-11 record.

Luton commended Porciello for his improvement over the course of the 2017-2018 season and is very encouraged looking ahead to next year. 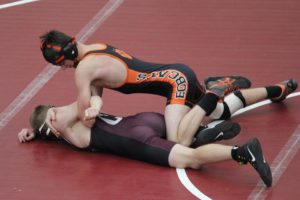 Login Dehner works an arm bar against a Cranberry opponent (earlier in the season).

Also falling one win short of reaching Regionals was junior 113-pounder Logan Dehner. Dehner’s tournament didn’t get off to a good start, as he lost a 10-0 major decision to third-seeded Dominic Inzana of Brockway (25-3) in his first match. Once on the consolation side of the bracket, Dehner went on a mini-run, sticking Smethport’s Trevor Zuver (8-8) in the second period and taking a 6-0 decision over Parker Fleming of Brookville (16-15). The sixth-seeded Dehner would fall in the semifinals to fourth-seeded and eventual third place finisher Dylan Pesock of Oswayo Valley (22-5). Dehner concludes 2017-2018 having posted a 21-8 record.

Cam Boggess, like Dehner, went 2-2 for the tournament. Wrestling at 170-pounds Boggess started his day with a quick first period pin (0:53) of Curwensville’s Nick Hobert. The eighth-seeded Boggess fell 13-4 to first-seeded Isaac Wright of Coudersport (23-5), who ultimately finished the tournament in second place. Relegated to the consolation rounds, the Clarion junior took a 2-1 decision over Port Allegheny’s Dalton Distrolla (8-10) before being eliminated via a 7-3 loss to fifth-seeded Derek Sunafrank of Bradford (23-11). Another first year Bobcat, Boggess, a junior, posted a 19-10 record for the season. 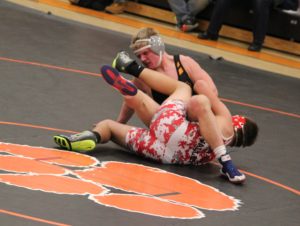 Cam Boggess fights for an escape against Redbank (earlier in the season). 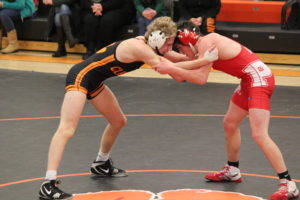 Cutter Boggess goes head to head against his Punxsutawney opponent (earlier in the season).

Cutter Boggess entered the tournament as the seventh seed at 138-pounds. After a first round bye, Boggess was pinned by Brookville’s Dontae Constable (25-5), a state qualifier last season, during the second period (3:36). The third-seeded Constable went on to finish in second place. Boggess won a 15-4 major decision against Garret Hogue of Cranberry (12-11), but was eliminated in his next bout when he was pinned in the third period (4:43) by Ethan Finch of Sheffield (14-12). Boggess, a freshman wrestling his first season for Clarion, put up a 19-11 record.

“Cutter wrestled well for his first trip to Districts. If a couple situations go his way he very well could have made a trip to regionals. He should have a very promising future ahead of him on the mat,” said Luton. 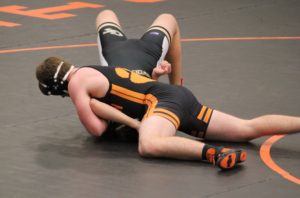 Seth Nellis looks to get the pin against Curwensville (earlier in the season).

Seth Nellis entered the tournament as the eighth seed at 182-pounds. Nellis lost his first match to first-seeded Garrett McClintick of Brockway (26-5) by pin fall in the second period (3:41). McClintick, ranked 18th in the state at 182-pounds went on to win the tournament. Nellis responded by pinning Bradford’s Austin McCracken (9-12) in the first period but was eliminated from the tournament when he was pinned in the second period (1:40) by fourth-seeded Justin Young of Port Allegheny (21-14). Young qualified for Regionals by finishing fourth. Nellis concludes his senior season with a 12-10 record.

Despite going winless at Districts, senior Frank Weber concluded an injury-marred season with a 13-8 record.

Summing up his team’s performance, Luton said, “Districts is always a test, mentally and physically. I thought the guys did a nice job overall. The obvious goal was to advance to the regional tournament but all we really expect out of our guys is 100% effort every match. When they do that it’s hard not to be proud of them.”

Categories
Tournaments and PlayoffsWrestling
Back to Top