(By CSZ Sports Writer Kenn Staub) This past weekend (March 1 and 2) two Clarion wrestlers, Tom Wurster (220-pounds) and Ryley McMasters (152-pounds), competed at the Northwest Regional tournament held in Sharon. By finishing fourth, Wurster punched his ticket to the PIAA Class AA Wrestling Championship beginning Thursday, March 8 at the Giant Center in Hershey. Unfortunately for McMasters, the weekend proved to be the last of his high school wrestling career. 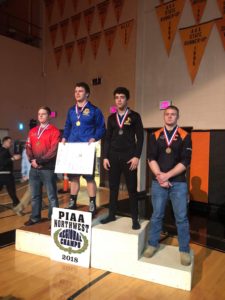 Wurster’s quest for a berth in the state championships began somewhat ominously, as he dropped a 5-2 decision in his opening bout of the tournament to the state’s 15th ranked 220-pounder, Tyler Zebrovious of Lakeview (33-6).

The Clarion senior got on track after this initial setback, reeling off two consecutive decisions to reach the consolation finals. After taking a 10-2 major decision over Cochranton junior Dalton Boozer (21-10), Wurster encountered his District 9 nemesis, Tyler Cook (33-7) of Brookville, in the consolation quarterfinals. The Raider senior had defeated Wurster just the week prior, the second time in the past two years that Cook has downed the Clarion grappler to claim the district crown. This time things were different, as Wurster, ranked 22nd in the state, eked out a 4-2 decision over the 7th ranked Cook.

In what must have felt like a case of déjà vu, Wurster, having secured a spot at states with his win over Cook, found himself again squaring off against Zebrovious. Zebrovious was relegated to the consolation side of the bracket when he lost a 5-2 semifinal decision to District 10 champion and eventual tournament titleist Jacob McMaster of Greenville (37-0). The Lakeview wrestler beat Wurster for the second time, a 6-2 decision, to place third.

Commenting following the tournament, Clarion head coach Brian Luton said, “We are extremely proud of Tom. His goal was to make the trip to Hershey this year and to see Tom reach his goal is exciting.”

“The 220-pound bracket was full of talent and for Tom to qualify we knew he would have to wrestle well and beat a few high level guys. The fact that he was able to beat Tyler Cook from Brookville to qualify for states had to be really satisfying for Tom. Tyler had gotten the best of him four or five times over the last two seasons. Tome was finally able to get the job done when it mattered most,” said Luton.

Commenting on Wurster’s chances in Hershey, Luton said, “Tom is excited to wrestle at states. It’s hard to predict what will happen but as long as he is mentally prepared Tom can compete with anyone.” 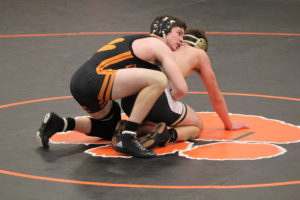 Ryley McMasters during the Curwensville match.

McMasters went 0-2 for the weekend, his tournament ending in the consolation quarterfinals. Following a first round bye McMasters faced the state’s 11th ranked 152-pounder senior Luciano DeRose of Titusville (33-8). DeRose would pin McMasters in the second period (3:10), relegating the Bobcat grappler to the consolation side of the bracket. In his first consolation match McMasters dropped a 7-0 decision to Sharpsville senior and 17 ranked Cameron Prebble (29-11). McMasters finishes 2017-2018 with a record of 16-8 and a four year varsity record of 45-44.

Reflecting on McMasters’ tournament and career, Luton said, “Ryley had a great season and career as a Bobcat. Ultimately, I’m sure he would have wanted some different results but you can’t say enough about his attitude. Ryley is the type of kid that makes coaching a lot of fun. You’re always sad to see it come to an end but he definitely left it all on the mat this weekend.”

Categories
Tournaments and PlayoffsWrestling
Back to Top