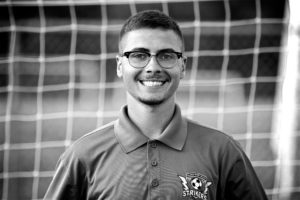 Recent Clarion University graduate, Thomas Hummel, coached Clarion County youth soccer for 4 and half years under the flag of Clarion River Valley Strikers (CRVS). CRVS is the premier competitive soccer club in Clarion County.  It is the only soccer club in the county to participate in the highly competitive PA West League. PA West is part of US Youth Soccer, Region One and is associated with US Soccer and FIFA.   CRVS offers competitive soccer for boys and girls, ages 7 through 18.   CRVS also offers a new developmental league for ages 4 through 11.  The club is focused on the development of players through individual skill, tactical teamwork, and proper sportsmanship.  CRVS has been fortunate to tap the talent from Clarion University with students representing many different majors.

Thomas’ time in Clarion was truly remarkable for the Clarion soccer community.  As a young 18-year-old just starting college at Clarion University, Thomas knew he needed to stay in contact with the beautiful game of soccer.  Graduating from Grove City High School in 2013 playing soccer as a forward, Thomas honed his soccer skills. After choosing to not play soccer at the collegiate level Thomas figured the next best thing to playing, was coaching.   He started coaching for CRVS at the under-10 level for 3 soccer seasons connecting with and engaging with many of the young local players.  As the years progressed and some of the older CRVS coaches graduated from Clarion University, Thomas found himself coming into more of a leadership role within the organization.

Thomas started to take the CRVS organization to the next level.  He developed a standard of excellence throughout the club.  He developed written expectations for players at every level in the organization.  There was now a focus on what the CRVS soccer players needed to be able to do and understand before moving up to the next age group.  This focus showed in the progress the soccer players were making on the field.  With recruitment of soccer coaches like Maddie Meyers and Kevin Griffin, Thomas was able to laser-focus on the development of all of the players throughout the CRVS organization.  Just as every soccer player in our organization knew and respected who Thomas was, he too knew every single Clarion River Valley Strikers player and their skill level.  For the first time in the CRVS organization, Thomas developed group practices of three CRVS teams at once, forming “coaching stations” with written plans for each practice and each station.  This created conformity and a unified coaching message permeating throughout the organization.

Lastly, Thomas and Coach Sean Esterhuizen filed for a grant that was to tie community and college together during the winter months.  After receiving the grant Sean Esterhuizen started a youth Fustal (indoor soccer with a harder and slower ball) league in the Clarion University Recreational Center.  The Clarion University Women’s team officiated and coached teams while Thomas ran the Futsal league bringing in players from as far as Franklin and Dubois.  This mutually beneficial relationship between Clarion University and the local soccer community only helps to bridge the gap for many prospective Clarion University students.  CRVS players, other local soccer players and soccer players from different counties now were able to play soccer year-round thanks to Thomas’ and Sean’s initiative.  Fall soccer season, Winter Futsal and Spring soccer season made an exponential impact on the development of our players.

Through his work ethic, love of the game and community mindset, Thomas left the Clarion soccer community a much better place than how he found it.  Today Thomas continues to further his coaching career as the Assistant Coach for Chesapeake College, Maryland.  He is also the varsity girls soccer coach for St. Michael’s School in St. Michaels, MD and earns a living with his Clarion University degree as a Science Teacher for St. Michael’s school.

(Thanks to Matt Lerch for this article and photo. Thanks to Thomas for you work with the youth of this area!!!!)

Categories
CRVS Soccer
Back to Top