(By Michelle Murray)
Alayna Murray had the unique opportunity to swim and train with two Olympic swimmers on Sunday, September 29, 2013.

Alayna attended the Fitter and Faster Swim Tour hosted by Swim Outlet at Chartiers Valley High School in Bridgeville, PA. She was able to train and work out with Olympians, Claire Donahue and Peter Vanderkaay! 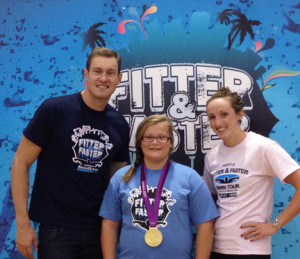 Alayna participated in skill & drill clinics in the water and on land, and had the opportunity to race with Vanderkaay in Freestyle and Butterfly events.

Alayna lives in Clarion and has been swimming for the Brookville YMCA for four years.  She is now a member of the Clarion County YMCA Riversharks swim team.

Following are brief bios of Peter Vanderkaay and Claire Donahue: