But that was exactly what took place, on Saturday night, at the Clarion-Limestone Football Field, as the Little Lions hosted the Forest-North Clarion Coyotes. I’ve been to a number of games, NFL, college, varsity, JV, Jr. High over the years, and few were as exciting as this one.

The game was the finale of a triple header that started in the afternoon with the Bantams, where the score isn’t kept (officially – but the kids keep track). Next, it was the JV game, won by the Lions, leading to the feature event.

Both teams gave the fans an offensive showcase that saw six lead changes.

The Coyotes struck first as quarterback Sam Minich hit paydirt on a naked bootleg around the right side. The two-point conversion failed. FNC led 6-0, with 4:20 left in the first quarter. 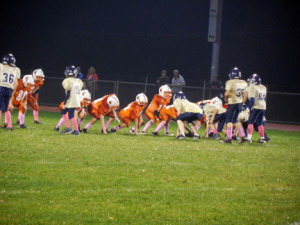 C-L answered with a first quarter touchdown of their own, on a run by Ayden Wiles. Skylar Rhoads ran in the conversion, giving the Lions the lead at 8-6. The Lions extended the lead to 14-6, in the second quarter, with Nick Frederick hitting Skylar with a touchdown pass.

Sam’s twin brother, Logan Minich ran the ensuing kickoff back for a touchdown, to bring the Coyotes to within two points, 14-12. Later in the quarter, Logan took a pitch down the right sideline for a touchdown of approximately 63 yards. Miles Miller went around the left side for the conversion and FNC had a 20-14 lead, at the half.

Tyler Wolbert recovered the onside kick to open the second half. Sam Wolbert had a 30 yard run to the Lions 20 and it looked like the Coyotes were in business, but they turned the ball over on downs. 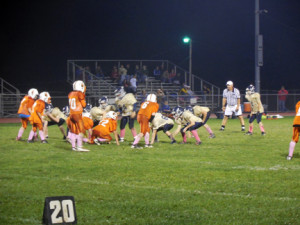 Damien Makray scored a touchdown with six seconds left in the third quarter and Wiles converted the two and C-L retook the lead, at 22-20.  A key play saw Wiles carry the ball from th C-L 27 to the FNC 39.

Coyotes turn: A 50 yard, Logan Minich run, placed the ball at the Lions’ eleven. He then ran in for the TD on a sweep. Miles Miller ran around left end for the two-point conversion. The Coyotes had the lead again, at 28-22, at 9:10 of the fourth quarter.

A Wiles’ touchdown run around the left side, tied the score with 3:02 left. C-L was going down the field as the fourth quarter was running out but Logan Minich intercepted a pass with :09 seconds left.

The score held up as the quarter ended, sending the game into overtime.

FNC won the toss. The ball was spotted at the ten. LoganMinich ran the ball around right end for the touchdown but the Lions stopped the two point conversion. The Coyotes now led 34-28.  The Lions answered on a Makray touchdown. The conversion failed and both teams lined up at midfield for congratulatory handshakes after a hard fought, well played 34-34 overtime tie.

Congratulations to both teams on a great game and I’m sure I speak for all the fans in attendance, when I say thanks for a very entertaining evening.

Categories
Coyotes
Back to Top