In a season of away matches, the Clarion Varsity Wrestling Team took their shortest trip of the year on Tuesday (02/04/2014), traveling to Knox for a contest with the Keystone Panthers. This long delayed dual meet, originally scheduled for mid-December to start the 2013-14 campaign, was settled in Clarion’s favor 64-12, as the Bobcats benefited from six Keystone forfeits and scored victories in six of the eight contested bouts. 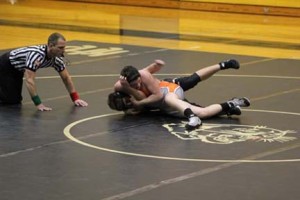 (Photos by Kenn Staub)
Austin Holz (160lbs.) in control of his opponent

Clarion jumped out to an early 12-0 lead, the product of a Keystone forfeit to sophomore Allen Barrett (152lbs.) and junior Jacob Troutman’s (160lbs.) first period pin (1:12) of Panther sophomore Evan Redding. Keystone evened up the match at 12-12 with victories in the next two contests, as Clarion sophomore Austin Holz (170lbs.) was pinned by senior  Evan Slater with time expiring in the third period of a back-and-forth affair and Bobcat soophomore Will Staub (182lbs.) lost via pinfall to junior Zach Stiglitz. Stiglitz’s team points would be the last of the evening for Keystone, as Clarion would reel off wins in the final ten bouts, beginning with Bobcat sophomore Alexander Burkhart’s receipt of a forfeit at 195lbs.

At 220lbs., sophomore Zach Sintobin scored a major decision for the Bobcats, giving up only a single point, an escape in the second period, on his way to 9-1 major decision over fellow sophomore Tyler Beal.  Sophomore Zach Huet (HWT) followed up Sintobin’s victory with a first period pin (1:06) of Panther senior Joe Kahl.  Sophomores, Alex Struble (106 lbs.), Caleb Bailey (113lbs.), and Adrian Weber (120lbs.) all received forfeits to put the Bobcats ahead 46-12. 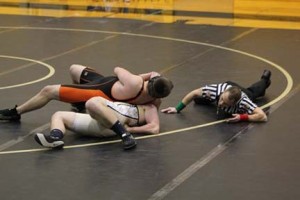 Zach Sintobin (220lbs.) with back points

Three of the evening’s final four bouts were contested. Senior Tristan Shaffer’s (126lbs.) two nearfall points in the third period proved to be the difference in his 4-2 victory over Panther sophomore Nick Baughman. After a Keystone forfeit to Clarion, sophomore Leo Aiello (138lbs.), Bobcat sophomore Prince Brooks stuck sophomore Austin Curtis, as time was winding down in the first period of their 138 pound bout (1:53). Senior Riley Gunter parlayed a reverse in the second period into a 2-0 grind-it-out win over sophomore Chad Rodgers to set the final score at 64-12 in Clarion’s favor. 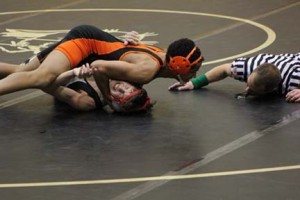 Clarion travels to Pittsburgh on Saturday (02/08) to participate in the Penn Hills Invitational and then concludes its dual meet schedule at home next week, wrestling doubleheaders against Sheffield and Cranberry on Tuesday (02/11) followed by Johnsonburg and Curwensville on Thursday (02/13).

(Thanks to Kenn Staub for this article and photos.)