Junior High Wrestlers Improve To 9-1, With Wins Over Johnsonburg And Cranberry (02/14/14)

In another great evening of wrestling, Clarion’s Junior High Wrestling Team faced Johnsonburg and Cranberry in a Tri-Meet held at Clarion High School. Led by Coach Lee Weber and Chuck Tanneyhill, the Clarion Junior High extended their winning record to 9-1 overall with wins over both teams. 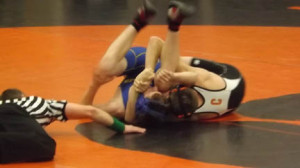 Josh Krieble locking up a pin against Johnsonburg.

Clarion vs. Johnsonburg
With only 6 matches to wrestle, Clarion easily overcame Johnsonburg. Wrestling for Clarion were Ryley McMaster with an incredible pin over Evan Furlong, in the first period, at 1 minute and 12 seconds. Greg Duncan fell to Devon Norlin by fall. Sterling Conner met a tough opponent in Jacob Zimmerman. He tech felled Sterling 16-1.

Despite the tough losses, Clarion came back strong. Josh Krieble had a pin over Nate Johnson and Dakota Stormer pinned Trey Schneider. Karlin Hiles also won with a pin over Jacob Wazelle in the second period.

Clarion vs. Cranberry
Cranberry came in with only 6 junior high wrestlers as well.

Greg Duncan lost to Charles Schreffler despite wrestling hard all match. Clayton Adams also came up a bit short. He lost in a 9-1 decision. 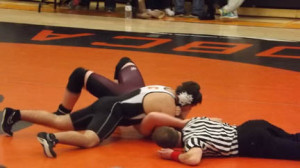 Karlin Hiles with a dominating pin against Cranberry.

Looking to turn the team around, Sterling Conner wrestled one of his best matches of the season against Jesse York. The wrestlers were very well matched and Sterling won in double overtime by ride out to win the match 1-0!  Colton Rapp beat his opponent Justin Vanwormer with a pin in the first period. Josh Krieble kept the winning streak alive with a pin against Jarrod Oliver in the first period of his match as well.

Not wanting to miss out on the action, Karlin Hiles pinned his opponent, Dasan Monross in the first period of his match! Great wrestling by everyone. The team won with a score of 69-10.

The team record on the season was 9-1 with its only loss being to Punxsutawney earlier in the season.

It was a great week of wrestling heading into Districts on Saturday, February 15th at Brockway High school.  Wrestling starts at 9:30 am.  Let’s go Bobcats!! 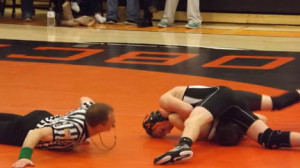 Colton Rapp with a nice pin against Cranberry.

(Thanks to Jayme Dehner for this article. Great Job Guys!!!!)