When it was all said and done, the Lady Gremlins came out victorious 36-28. Although it was a loss, the eight-point game showed improvement for the Lady Cats, as their regular season match-up resulted in a twenty-one point, 54-33 win for Karns City. 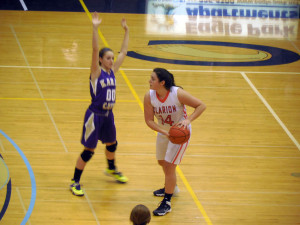 The Gremlins’ LeeAnn Gibson, who led all scorers with 19 points (15 in the first half), opened the game, with a five point run. Then Lady Cat, Kyla Miles answered with five of her own to tie the game at 5-all. The Cats would stay close throughout the first period and trailed by only four, at 11-7, as the buzzer sounded to end the quarter.

But that was as close as Clarion would get, for the rest of the evening. The halftime score was Karns City 19 – Clarion 12. A 7-2 run, by the Gremlins, to open the second half, gave Karns City their biggest lead of the game, at 27-14. The third quarter would end with the Bobcats down 30-18.

Karns City would carry a double digit lead until late in the fourth quarter, when four points by Laken Ganoe, on a field goal and two free throws, brought Clarion to within six points, at 34-28. The last free throw by Ganoe would be the Bobcats’ final point, as Karn City’s Alyssa Gibson closed out the contest with her only points of the night, on two free throws. 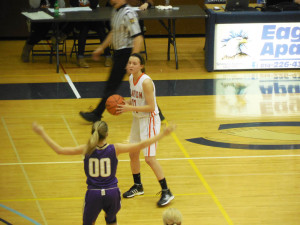 Miles led Clarion with 9 points, followed by Maci Thornton with seven. Ganoe scored 5 points, Nicki Glenn had three, while Grace Kroh and Lauren Wiser each chipped in with two.

Emily LoPresti had 8 points, for the Gremlins, Emily Shumaker had 5 and Shanel Preston scored two.

The Lady Cats are now 17-6, as they enter the District Nine Class-A playoffs, next week. The 21-1, Lady Gremlins will enter the Class-AA playoffs