On February 10th, the Clarion 6th graders took on Keystone in Monday Night Basketball League, action at Joe’s Gym.  Clarion led at halftime but was unable to hold on for the win, as Keystone came back to tie the game and send it into overtime.  Nothing would be settled in extra stanza, however, and the game finished at 22-22.

During the opening ten minutes of play both Clarion and Keystone scored two baskets apiece, knotting the score at 4-4 with five minutes left in the half.  At this point, Clarion Coach Keith Murtha began employing a half court press that led to the Bobcats scoring eight of the final ten points, before intermission.  Clarion’s charge was started by Nate Datko who scored on a break from midcourt, after which Ben Murtha converted a turnover into another two points for the Bobcats. 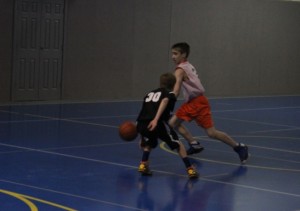 (Photo by Kenn Staub)
Nate Datko dribbles around a defender

Subsequent breaks off of turnovers saw Clarion go to the line following down court fouls by Keystone, netting the Bobcats four points and a halftime lead of 12-6. Datko led Clarion with 4 points during the first half, while three Keystone players scored 2 each.

The first five minutes of the second half saw Keystone begin clawing their way back, narrowing the Bobcats’s margin to 17-14. Clarion’s Tyler Schmader hit for two and Nick Frederick converted a three-pointer to put Clarion ahead 22-16 with five minutes left in regulation. The final five minutes belonged to Keystone, as they reeled off six unanswered points, scoring the game tying basket with three seconds left to play. Neither team scored in the two minute overtime period and the game ended, by league rule, in a 22-22 tie.  Schmader had a team high 4 points for Clarion after intermission, with Andrew Lauer netting 10 to lead Keystone. 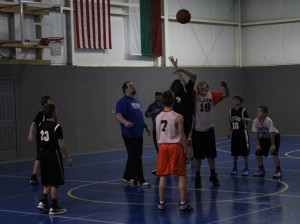 (Photo by Kenn Staub)
The tip off to begin overtime

Following the game Coach Murtha reported being proud of his team, adding that they played one of their best games from start to finish and put in “a great team effort”.  Coach Murtha further noted that his team’s defense has “really come a long way”, with their execution of the half court press in the two minutes prior to halftime being the “Sports Center highlight” for him.

The Clarion 6th Graders will take to the court again on Monday, February 17th at Joe’s Gym.

(Thanks to Kenn Staub for this article and photos.)