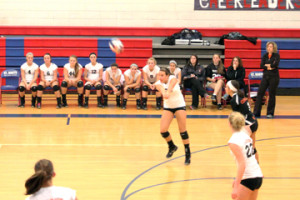 Matti, who is being recruited as a libero, joins Hopewell, right side hitter, Mackenzie Biggs, Lindsay, Ontario, outside hitter, Victoria Evans and Carlisle, libero Morgan Herold, in this year’s class.

Matti was a member of this past season’s Lady Cat State Class A Volleyball Championship Team. The Lady Cats were State Runners-up during Matti’s sophomore and junior seasons. The team won KSAC and D-9 titles, all three seasons, Regional Champs (2010-11, 2011-12) Western PA Champs this past season.

In the Lady Golden Eagles Volleyball Team, Matti will be joining a proven program, which has qualified for the NCAA D-II playoffs each of the last four years and nine out of the last eleven seasons. The team went 24-12 and reached the Regional Semi-Finals last year. Coach Mills is the winningest volleyball coach in CUP history, at 145-61. She has led the team to the NCAA Playoffs five times.

Matti’s love of volleyball has grown over the years and has taught her much. She said, “I never really expected volleyball to be as important to me the way it is now. But little by little, since seventh grade it has been growing into one of the most important things in my life. It has brought me so much joy and has taught me honest hard work. I’m so thankful for volleyball because of the lessons that I’ve learned.”

Clarion Head Volleyball Coach, Shari Campbell and Assistant Coach Erika Bevevino are major influences in Matti’s life. She states, “I was extremely fortunate to have an excellent coaching staff. Coach Campbell and Coach Bevevino have been so important to me throughout my career. I have learned many lessons that I have applied not only to volleyball, but to life as well. My knowledge of the game has grown immensely while playing under Coach Campbell. I am so thankful for her constant drive, and I know that I have such a love for the game because of her and Coach Bevevino.” 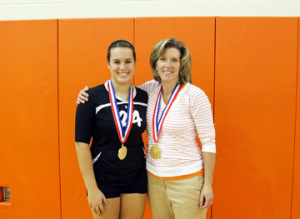 She added that, “Matti should be a great match with the other Clarion University players. She has a great command of the service game (97 percent). She’ll help the Eagles from the service line.”

Matti is part of a trio of Lady Cats volleyball players who will be playing in college next season. She joins Ellie Burns who will play for Pitt and Gretchen Vandermeer who will be on Salisbury University’s team, in going on to the next level.

Of her college bound trio, Coach Campbell said, “All three of the players lend themselves well to the college game. Every team needs good defensive play and ball control. Ellie and Matti bring that. Gretchen is a very knowledgeable player, who can come in and play at the college level. Gretchen fits in well in that capacity, with a large repertoire of sets already.”

CHS Teammates hold a special place in Matti’s life. Expressing their importance to her, Matti shared, “I am also so grateful for the teammates that I’ve had not only this year, but also the upper classmen that I have played with in the past. I still look up to them so much and they have been a constant reminder and inspiration for me. So while I do look up to them, I cannot however, ever talk enough about my fellow seniors this year. We have been playing together since sixth grade, and have grown so close because of volleyball. This sport has left us with so many memories that I will cherish for the rest of my life. It’s because of them, and their belief in me, that I grew to love this sport and continue my volleyball career. I cannot thank them enough.”

Matti is looking forward to what lies ahead, as a member of the Lady Golden Eagles. She comments, “But while I will truly miss my team so much, I am very excited for my collegiate career. I’ve been around Clarion’s program for a good while because it is so close. I’ve always felt like that was the direction that I was supposed to go, and I can’t wait to work hard this coming fall. It’s going to be hard leaving my high school career behind, but I can’t wait for the new players and experiences that the other “Clarion Volleyball” has in store.” 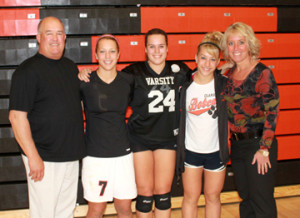 As one would expect, her family, parents Jim and Bridget and sisters Maci and Maya are very important to Maci and have helped her in her volleyball quest. Matti says, “Finally, I would like to thank my family. I have two younger sisters and they have always supported me in volleyball. I’m glad that I’ll be close to home so that they can continue to drive me. My parents have been a huge support system as well. This past season was hard because of an injury that I suffered from early on, but they never let me give up. Both of them are in the health field so it was great to have them pushing me in the right ways.”

“Once again, I want to thank everyone who has ever supported me, and I can’t wait for what is to come. Volleyball has brought me so much joy, so I’m very thankful that my journey is about to continue.”

CUP Coach Mills has some fine things to say about Matti.

Coach Mills likes that Matti is a team player, saying, “What we really liked most about Matti is that she exemplifies what the Clarion University Volleyball Program is about. She is a highly unselfish player who puts the team ahead of herself.”

She likes Matti’s work ethic in athletics and the classroom. Coach Mills said, “She works hard both on and off the court and puts her academic interests first and foremost.”

As for what Matti brings to CUP Volleyball and her expectations for Matti, Coach Mills said, “Matti has a great platform and is expected to enhance the level at which we are currently passing on serve receive. This is one of her best attributes with regards to skill.

“I also feel that she possesses the speed and skill to be a great defender. As she becomes more comfortable with our defense I feel that she will excel.”

Coach Mills’ goals for the team show a commitment to basics. She states, “Our main goal each day is to come into the gym and get better. Before we can discuss any opponents, we must take care of our own training.

“I feel that if we are training at a high level and if we are mindful with each repetition that winning takes care of itself.”

Sounds like a program that is a perfect fit for Matti.

Congratulations, Matti and the best to you on your career at CUP!!!!

Categories
Volleyball
Back to Top