The Bobcat Football Team traveled to St. Marys, on Friday night, to take on the Flying Dutchmen at Dutch Country Stadium and came away with a 46-0 victory. The Bobcats are now 6-0 and have Mercy Ruled every opponent so far this season. 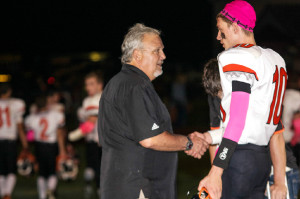 After going up 6-0, on the Cats first offensive play of the game, an electrifying 75 yard run by Ian Corbett, the Dutch methodically drove down the field eating up 9:52 off the clock, only to be stopped on downs with an incomplete pass thrown from the 5 yard line.

On the Cats’ first play of the next possession, Damien Slike ran up the middle to the fifteen. Then Katis, who needed 34 yards to pass Drew Zwald for second place and 69 yards to pass Brandon Heeter for the all-time mark, hit his favorite target, Cody Hearst who had a step or two on the defender, at the 50 yard line. Cody caught the ball in stride and ran it the rest of the way for an 85 yard touchdown, with 18.4 seconds left in the first quarter.

The two-point conversion failed and the Cats led 12-0. And after the Bobcat Band finished playing the fight song, the St. Marys’ public address announcer graciously passed on congratulations to John from the Dutch, which set off some nice applause and cheers from both stands.

Special Teams provided the next score. St. Marys faced a fourth and four, from their own 33 yard line, just under a minute into the second quarter, and decided to punt. Brendan Miller broke through the line, to block the punt. Slike scooped it up at the 21 yard line and raced to the endzone. The PAT was good and the Cats led 19-0.

Miller also set up Clarion’s next score by intercepting a pass at the Dutch 31 and returning it to the 15 yard line. On the first play from scrimmage, Slike took a handoff around the left side and followed some nice blocking into the end zone. The Cats were successful on the two point conversion, with the Cats seemingly lining up to kick. But Miller, the holder, hit Luke Nellis in with a pass in the endzone, giving Clarion a 27-0 lead, at the 9:08 mark of quarter number two. Twenty-six points, while only running four offensive plays and having the ball a total of 51:5 seconds. 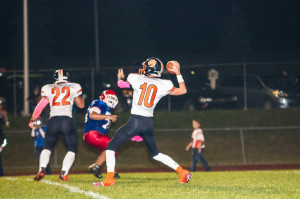 Miller got his second interception of the game, just before halftime, picking the ball off near the goal line and returning it to the Clarion nine yard line. The Cats took a knee to end the half.

After receiving the second-half kickoff, Clarion set up at their own thirty-three. Slike took the ball up the middle to midfield stripe, then Hearst, on an end around, raced down the left side for the score. The kick was good and the score moved to 34-0, at 10:34 of the third quarter.

The Bobcats’ next touchdown came as Katis hit a wide open Hearst in the left side of the endzone, from 5 yards out.  The play capped a sustained drive from the Clarion 34 yard line, that featured a mix of runs and passes.

Katis completed 6 of 7 passes, for 139 yards and 2 touchdowns. He now has 2539 career yards. Hearst finished the game with all six of the receptions and two touchdowns, to go along with the 50 yard touchdown run. He also had nine tackles.

Ian Corbett had the one run for the 75 yard touchdown. Slike had 8 carries for 75 yards and two touchdowns. He also had the touchdown on the fumble recovery and eleven tackles.

Tyler Allen had a great game on offense. Though he didn’t score, he had 4 carries for 69 yards. But he really shined on defense, with a whopping 17 tackles and 1.5 sacks. And not far behind, was Destin Strauser with fourteen tackles.

For St. Marys, Alex Feldbauer had 19 carries for 79 yards. Nick Cunningham completed 8 of 14 passes for 63 yards. Tyler Yetzer caught 5 passes for 34 yards and Brady Bauer had 3 receptions for 29 yards.

(Thanks to the Tri-County Sunday for St. Marys stats.)

Categories
Football
Back to Top