Over two hundred athletes, from the area converged on Memorial Stadium on Thursday, May 8th, for the Clarion County Special Olympics Track and Field Meet.

Teams from the A-C Valley, Clarion Area, Clarion-Limestone, East-Forest, Keystone, and Union School Districts and TTSR and UCIP participated. Among those helping to make this a memorable day for the Olympians, were Clarion County Special Olympics staff members, caregivers, high school students and other volunteers. 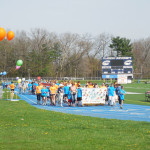 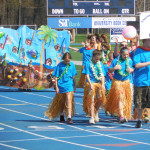 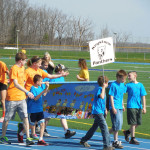 Keystone Athletes with their “Fun In The Sun” banner

The festivities started with the “Parade of Athletes” with the Clarion Area Band, under the direction of Mr. Chris Curry, providing the music. The teams marched around the track, each with its own unique banner.

Next, the Keystone Panthers Competitive Cheerleading Squad performed several routines, to the delight of the crowd. After that the Keystone High School students sang the National Anthem with the “Colors” presented by the Knights of Columbus. 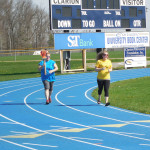 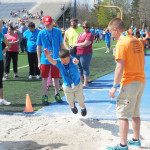 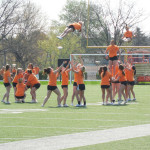 Reverend Daryl Larsen, from The First United Methodist Church in Clarion, led the invocation. This was his seventh year to do the honors and he received a nice ovation after emcee/PA announcer Neal Lewis mentioned that this would be Dr. Larsen’s last year, as he is retiring.

Shelly Reddinger and Cody Carlson led the Athlete’s Oath, then it was on to the competition. 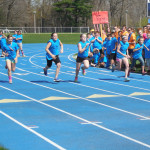 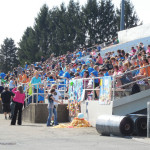 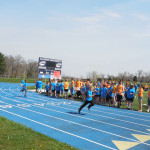 Young men on the home stretch

There were an number of businesses and organizations who donated to this year’s event.

She continued, “In the past we offered athletics, aquatics and golf but because of the lack of coaching had to discontinue these sports.

“We are hoping to find volunteers interested in certifying as coaches for these so they can be offered again.”

For more information on volunteering or donating to The Clarion County Special Olympics, contact Beck at sopaclarion@yahoo.com or P.O. Box 545, Clarion, PA 16214

Categories
Special FeatureTrack and Field
Back to Top