A team of Clarion-area 11 and 12-year-olds, playing under the banner of B&W Smith Excavating, went undefeated to claim the championship of the 8th Annual Meadville Mayhem Classic 12u baseball tournament on Saturday, May 10, 2014. After a close opening round win over the Franklin Firestorm, the boys of B&W Smith played dominating baseball, “mercy ruling” their next two opponents to reach the title game. In the championship tilt the Clarion team backed up superb pitching with an offensive effort that featured four home runs to down General McLane 15-2 and win the title. 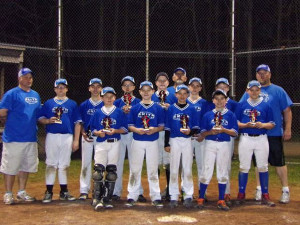 B&W Smith’s opening round game against the Franklin Firestorm proved to be the Clarion squad’s closest of the tournament, as they were only able to eke out three hits on their way to a 5-2 victory.

Playing as the away team, the Clarion squad jumped out to an early lead, scoring two runs in the top of the first inning. Nate Datko, B&W Smith’s second batter, walked and advanced to second when Ben Smith hit a two out single to the left side. Datko and Smith each moved up a base on a passed ball to the next batter, Josh Craig. Craig proceeded to put the ball in play, scoring both Datko and Smith. B&W Smith was unable to hold the lead, however, as Franklin plated two runs in the bottom of the frame.

The game remained knotted at 2-2 until the top of the fourth, when the boys from Clarion took the lead for good. Curvin Goheen, leading off the inning, walked and took second on a one out wild pitch to the third batter, Craig. Goheen moved to third on a Craig sacrifice and then scored when the next batter, Cole Slaugenhoup, singled to left field with two outs. Slaugenhoup claimed second on a wild pitch to the following batter, Cal German, who reached first on a four pitch walk. An active Slaugenhoup gained third on another wild pitch, this time to Greg Kalinowski. 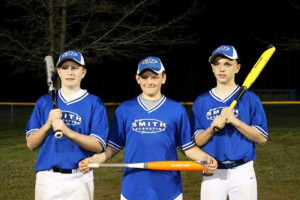 Kalinowski loaded the bases when he was also walked. With bases jammed and two outs Hayden Callen received a free pass, pushing Slaugenhoup across the plate, making it 4-2 heading into the bottom of inning. Clarion was not finished, however, adding an insurance run in the top of the fifth. Skylar Rhoades, batting in the second spot, hit a hard, one out single to left field and advanced to second on a Franklin error. Datko, following Rhoades in the lineup, sacrificed his teammate to third. With two outs Rhoades scored from third on a passed ball, setting the final score at 5-2.

Offensively against Franklin, Smith, Rhoades, and Slaugenhoup contributed singles. Callen and Slaugenhoup were each credited with batting in a run. Datko started the game for B&W Smith, pitching one inning before being relieved by Goheen. Goheen, pitching the second and third, struck out one and held Franklin scoreless on his way to earning the victory. Rhoades took the hill in the fourth and fifth, striking out four to secure the hold. Callen pitched a scoreless sixth to claim the save. 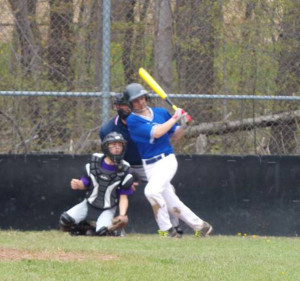 (Photo by Monica Goheen) Skylar Rhoades turns on a pitch

After defeating Franklin B&W Smith played as the away team against the Crawford County (Meadville) Crush. The Clarion team broke the ice in the top of the second, taking a 1-0 lead. Slaugenhoup received a one out walk and then moved around the bases on a combination of wild pitches and passed balls to score the first run of the game. B&W Smith added to their lead in the top of the third. Nick Frederick led off the inning with a double to right field and took third on a passed ball to the next batter, Rhoades. Rhoades eventually walked and the following batter, Datko, was hit by a pitch to load the bases.
Goheen singled to left field, plating both Frederick and Rhoades. Datko and Goheen each advanced a base when the next batter sacrificed, with Datko scoring from third on a one out passed ball.

Leading 4-0 the boys in blue and white put the game away in the top of fourth, scoring six runs, four coming after two outs had been recorded. German started things off with a single and advanced to second when Callen singled with one out to centerfield. Lake Staub walked to load the bases. Frederick followed with a double to center field, driving in German and Callen and putting Staub at third. With two outs Datko hit a double of his own, pushing across Staub and Frederick. The next two batters, Goheen and Smith, walked to again load the bases. Craig walked to score Datko, with Slaugenhoup walking to score Goheen, giving B&W Smith a 10-0 lead that ultimately resulted in a “mercy rule” victory when Crawford County could not score in their half of the inning. 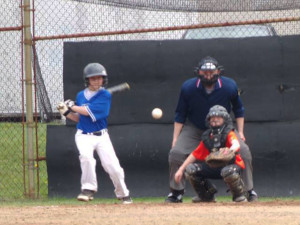 Datko (single, double) and Frederick (two doubles) both had multi-hit games against Crawford County. Callen, Goheen, and German all had singles. Goheen, Datko, and Frederick each knocked in two runs apiece, with Craig and Slaugenhoup bringing in one. Callen started the game and earned the win. German pitched the second and third innings, striking out three. Slaugenhoup struck out one during his fourth inning appearance.

B&W Smith had already secured a spot in the championship before the start of their third game against the Warren Wildkatz. This fact, however, did not stop the Clarion team from playing their usual intense, hustling brand of baseball, though they did get off to a somewhat slow start. Warren, the away team in this contest, scored two runs in the top of the first and added another in the top of the second, staking themselves to a 3-0 lead.

B&W Smith finally got on the board in their half of the second, using a two out rally to score four and gain the advantage. Slaugenhoup singled to CF with one out and then reached second when Kalinowski hit a single to the same location. Callen followed Kalinowski with a single, scoring Slaugenhoup. Kalinowski and Callen moved into scoring position on a passed ball to the next batter, both scoring when Staub singled to right field. Frederick put runners on first and second when he walked, bringing Rhoades to the plate. Rhoades doubled, sending Staub home and putting the Clarion squad up 4-3. 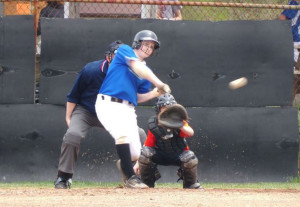 After holding Warren scoreless in the top of the third, B&W Smith put the game away in the bottom of the frame, scoring nine runs after two outs had been recorded. Smith drew a one out walk and moved to second when Craig singled to right.

Smith and Craig each advanced a base on a wild pitch to the next batter, Slaugenhoup, who walked to load the bases. German hit into a fielder’s choice which saw Smith thrown out at the plate, though the bases continued to be loaded.

With two outs, Kalinowski walked to force in Craig. Callen followed with a single to center field, scoring Slaugenhoup and moving everybody else up one. German stole home, with Kalinowski going to third and Callen second, as Staub was in the process of drawing a two out walk. Kalinowski scored and all runners advanced one when Frederick reached on an error. Another Warren error, this time on a ball hit to the left side by Rhoades, cleared the bases and allowed the final four runs of the game to cross the plate. B&W Smith shut down Warren in the top of the fourth to preserve a 13-3 “mercy rule” victory.

Callen and Goheen each had two singles for B&W Smith against Warren. Rhoades contributed a double, as Craig, Datko, Kalinowski, Slaugenhoup, and Staub hit singles. Callen had two RBI, with Kalinowski, Rhoades, and Staub each receiving credit for one apiece. Goheen started the game and was relieved by Craig, who got the win, with two outs in the second inning. German pitched the final two innings, striking out three. 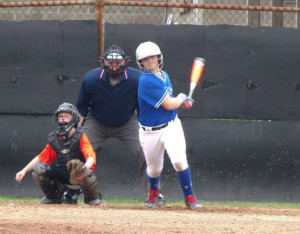 Clarion, again playing as the away team, drew first blood, going up 2-0 in the top of the first. Datko doubled to right field with one out and then scored when the next batter, Goheen, singled. Goheen moved to second and third on wild pitches, scoring when Slaugenhoup plated him with a two out double to left field. Neither team was able to score again until the fifth, when the B&W Smith hitters blew the game wide open after two outs had been registered. The third hitter of the inning, Callen, singled to center field and then moved to second when the following hitter, Staub, alertly took first on a dropped third strike that would have ended the inning. With two outs Frederick singled to right field, driving in Callen as both Staub and he pulled into second and third respectively on the throw. Rhoades subsequently cleared the bases with B&W Smith’s first homer of the game, a three run shot to center. Datko then hit a sharp line drive to third, knocking the glove off the defensive player’s hand, allowing him to pull in at second on a hit-error combination. He was driven home when Goheen went yard with B&W Smith’s second homer, a drive to right field.

After Goheen’s homer Smith doubled to center field and scored the final run of the inning on a Craig single to left. McLane scored two runs in the bottom of the frame to narrow the gap, making it 9-2 moving into the top of the sixth.

The sixth inning, however, saw the Clarion team put an exclamation point on the tournament.

Kalinowski led off with a walk and advanced to second on a passed ball. Staub was the beneficiary of a one out, four pitch walk, putting runners on first and second. Frederick reached on a ball hit to the right side, scoring Kalinowski and moving Staub to third. Staub and Frederick both advanced a base on a wild pitch, setting the stage for Rhoades’s second three run homer of the game, a hard hit line drive to center field that couldn’t have been more than three feet above the fence when it exited the park. Not done yet, B&W Smith’s Goheen doubled to right field and then scored on the Clarion team’s fourth homer of the game, a right field shot by Smith to close out the scoring.

(Thanks to Coach Staub for this article. Congratulation B&W Smith!!!!)