The Clarion Cyclones 14-Under Fastpitch Softball Team, which is made up of young ladies from across Clarion County, recently won the 2014 United States Specialty Sports Association (USSSA) Western PA State Championship.

The Championship Tournament which took place on the weekend of June 20-22, was held in Oakdale.

The Cyclones, who went undefeated throughout the tournament, faced the Pittsburgh Passion in the Championship Game and came away a 6-0 shutout win.

As the Western PA State Champions, the Cyclones qualify to compete in the USSSA Word Series, which will be held in Ocean City Maryland, from Tuesday July 22nd through Sunday, July 27th. 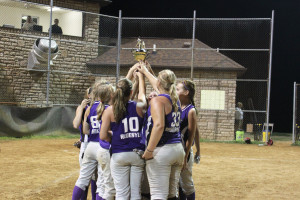 (Thanks to Coach Mahle for information for this article. Congratulations to the 2014 Western PA State Champion – Clarion Cyclones wishing you continued success at the USSSA World Series!!!!)