As the regular season came down to the wire, SMI was in an interesting position. They controlled their own destiny for Season Champs and #1 seed in the Clarion LL Tourney. SMI was also in position to finish 2nd or 3rd with a loss and Pub wins. As the Friday night games began on 06/06/14, SMI at the very least needed a Pizza Pub loss to secure 2nd place. Pub wasn’t’ about to go out without a fight, Pub won and stayed alive in the conversation for 2nd. 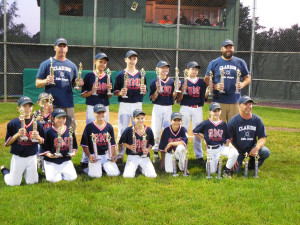 As the night advanced, SMI took on Rotary. Rotary had second place locked but was hoping for the big upset of SMI, in order to seize #1. Rotary, however, was no match for SMI and they went down to the boys in blue for the third and final time of the season. SMI was led by the pitching and hitting of Skylar Rhoades, who singled and tripled and also the hitting of Todd Brazier and Christian Simko. Brazier doubled to the fence and hit his first ever LL homerun, a line drive shot that cleared the left field wall in a hurry. Simko singled. The win gave SMI the regular season Championship and sealed a first round bye. SMI 5-1.

SMI came back to action on 06/11/14 and took on Burns & Burns. B&B had been a thorn in the side of SMI all season long, besting the boys in blue 2-1 on the season. SMI wasn’t about to go down 3-1 and get bumped from the playoffs, but mother nature had something to say and the sky opened up and the game was not to be this night.

The two teams met again Thursday 06/12/14 and in a pitch count, little league world this presents managers a great deal of problems. Who to pitch? How many pitches to throw? SMI called on Owen Reinsel, who pitched a fabulous 4 innings. Skylar Rhoades, Christian Simko, and Todd Brazier were also called upon and were all kept under 20 pitches in order to go again Friday night. Rhoades, Brazier, Dan Ketner, and Gary Matus led the way hitting for SMI. Rhoades tripled and singled, Brazier doubled, Ketner singled, and Matus hit his first little league double and topped it off with a single. Hayden Callen led B&B with 2 doubles on the night. SMI 9-5 advanced to Championship game. 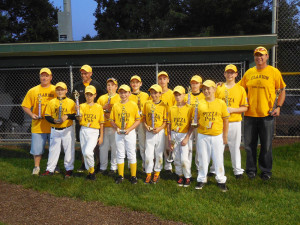 SMI came back to the ball field Friday night 06/13/14, as they had the previous two nights, calm, cool, collected and trying to stay dry. As Pizza Pub and SMI prepared for their Championship bout the rains continued to fall, but the sky cleared and with the help of many volunteers the field was ready for play.

This game would be a showdown of 12 year olds on the mound for both teams, as Skylar Rhoades took the mound first for SMI and Josh Craig took the mound for Pizza Pub.The game drew out into what was essentially a duel between the two, until Nate Datko hit an in the park homerun, scoring the first run of the game and putting Pub up 1-0. It was the only hit Rhoades gave up in 5 and 2/3 innings.

The boys in blue slowly began to come alive and though they had runners on bases in previous innings, they had yet to crack the scoreboard.

The mood had changed though and SMI was coming alive in the dugout to start the bottom of the 5th. Jesse Lewis led off and singled, Rhoades then singled, and Simko drew a walk. With bases loaded Todd Brazier grounded into a fielder’s choice that saw Lewis thrown out at home.

With bases still loaded, 2 outs, and still down one run, there was no letup in SMI (as had been the case all season). Kaden Park then came to the plate and after battling with two strikes, provided a much needed hit up the middle scoring Rhoades and advancing all runners. 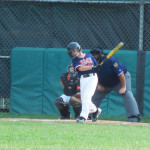 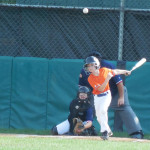 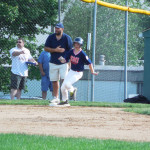 Skyler Pastor then drew a walk off the new Pub pitcher Ian Larson (Josh Craig who pitched a terrific game reached his pitch count limit) plating Simko. Bases still loaded and 2 outs and once again rookie Gary Matus comes thru for his teammates and hit a single to right field scoring Brazier and Park. The inning ended 4-1 SMI.

The game drew closer in the top of the 6th, as Pub batters Ian Larson and Ben Murtha each singled with Murtha bringing home Larson, but SMI pitcher Todd Brazier, who replaced Rhoades with 2 outs in the top of the 6th, was able to induce a groundball out and bring SMI its second first place trophy of the season. 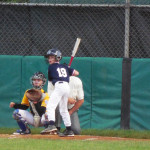 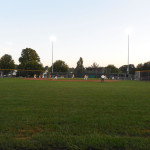 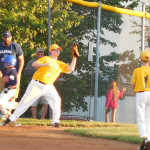 I would like to thank the SMI parents for their season long support, the SMI team and coaches Dave Reinsel, Tom Pore, and Lee Park. Also Dave McClaine for his coverage on Clarion Sports Zone, Ryan Pugh for his coverage in The Clarion News and all the volunteers who made for a memorable 2014 Little league season.

(Thanks to Coach Simko for this article and congratulations to SMI, Pizza Pub and all the teams on a fine league season!!!!)

Categories
BaseballLittle League
Back to Top