The Pennsylvania Scholastic Football Coaches Association (PSFCA) 2014 Hall of Fame Induction Ceremony and Banquet was held this past Saturday (June 14) afternoon. Among those receiving the highest award for Pennsylvania High School Football Coaches, was Clarion’s own Norm Zwald. 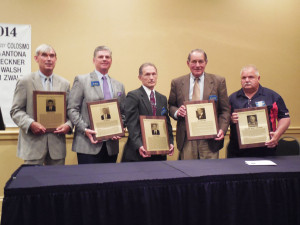 The late Clarion Area and Ridgway mentor is part of this year’s class, which also includes Brockway’s Ray Reckner. This marks the first time  two Little 7-12/KSAC Conference coaches were named in the same year.

In addition to the the Induction Ceremony and Banquet, the Coaches were presented to the crowd at halftime of the Big 33 (PA vs MD) Game, Saturday evening.

PSFCA President, Homer Delattre, the Head Coach from Hollidaysburg High School read each coach’s biography, prior to their being introduced by a family member or special friend.

Coach Austin described many of Coach Zwald’s innovative ideas, including allowing players to drink as much water as they needed and very little live hitting in practice. These and other innovations of Coach Zwald definately went against the mainstream in coaching philosophy, in the 1950’s – 1970’s.

Accepting the induction for his father, was Drew Zwald, who was a starting quarterback for the Bobcats, in 1967 and 1968, holding various school passing records for over 40 years. Drew Zwald went on to play football at William and Mary. He currently teaches at Georgia Southern University.

Drew Zwald echoed Coach Austin’s take on his father’s innovative coaching ideas and molding of players, as well as, describing Coach Zwald’s fine job as a husband and father. He mentioned that his father would have been very proud and humbled to be included in the Hall of Fame fraternity.

A theme throughout the ceremony was about the inductees being molders of young men. 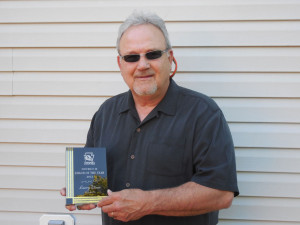 Coach Reckner was introduced by his son Mitch, who described playing for his father as well as mentioning the respect and admiration he had for him, saying that he always wanted to grow up to be like his dad. What better compliment could he have paid his father.

Coach Reckner mentioned that it was never about him. It was always about the kids. This seems to be standard operating procedure for Hall of Fame Coaches.

An announcement was made during the ceremony, the the PSFCA is working with Pitt, Penn State and Temple (the states three major universities) to have each school put up a plaque with the names of each member of the Hall of Fame enscribed on it. It looks like the first one that will get the plaque up is Pitt. Their plaque will be in the concourse of Heinz Field.

In attendance were a number of Coach Zwald’s and Coach Reckner’s family members.

Congratulations to Drew and the rest of the Zwald family and Coach Reckner and his family as well as their players, school districts and communities for this great honor!!!! And congratulations to Coach Wiser for his Coach of the Year Award!!!!