A large number of Bobcat Football players, including players from North Clarion which co-ops with Clarion for football, are taking part in the drills. The players range from incoming seventh graders through next season’s seniors. 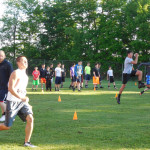 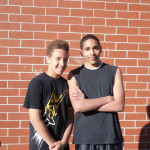 North Clarion Freshman Tracen Douglas and Junior, Donnie Heywood, members of the Bobcat Football Team, who are taking part in the F.A.S.T. program 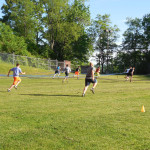 Bobcat Varsity head coach, Larry Wiser is very pleased with the results he sees from the F.A.S.T. Program. “The biggest thing for me is injury prevention, combined with the fact that the different movements that they work on are the types of movements that you do on the football field. That’s why I like the training. I think that helps.

“It is not just a matter of going out and running on a track. They’re cutting… They’re doing the kinds of things, where in the past, we may have gotten groin pulls and hamstring injuries and unfortunately some knee injuries. They are strengthening some of the things those things here.” 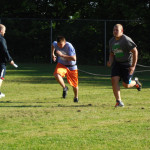 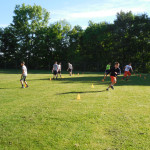 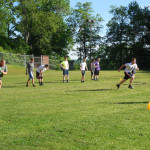 Coach Wiser sees another huge benefit to the F.A.S.T. training. “Another obvious advantage is the fact that it does improve quickness and speed. There is no question. It’s been an asset for us since we’ve started the program. I think we’ve had bigger kids… all sizes… they’ve just been able to move better on the football field.”

Some other schools around the area have used the F.A.S.T. Program, including Dubois, Clearfield and Moniteau.

Coach Wiser sees the fruits of the program when the Bobcats get to Team Camp. He said, “The other benefit is our kids come to camp in shape, which enables us to cover more of our material. We find each year that going to camp, when we’re putting our offensive and defensive schemes in, they’re not sitting there Owe, ooh, ahh; they’re not breathing hard. We’re ready to go and this has been a big part of that success.

“Again, the key thing is injury prevention. I was just amazed at some of the newer kids who came in here, some of the sixth graders, going into seventh grade, in a short period of time how much they’ve improved, their technique, running and so forth.

“It’s amazing how this transfers to the football field. See them out their back peddling, making cuts, some of the resistance training helping with their stride, some of those things.”

Coach Boring really likes working with the Bobcats, “I enjoy coming to Clarion… These kids are awesome.” And Coach Wiser give Coach Boring and his staff and the program an A+, saying, “I’ve been very pleased with the program.”