The Clarion Area Bobcats had a great showing, for the North in the 30th Annual Central Pennsylvania Football Coaches Association –  Lezzer Lumber Classic, at Altoona’s Mansion Park on Friday. The Football All-Star game, involving players from Districts 6 and 9, saw the North come away with a 24-7 win, to knot the series at 15-all. Clarion Area players, scored every point for Coach Larry Wiser’s, North squad. 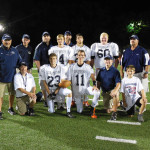 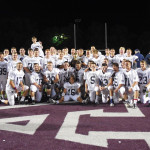 The North opened the scoring, at 3:23 of the first quarter, when Bobcat Damien Slike caught a 14 yard pass, in the left flat, from the North’s Offensive MVP, Cameron Tobias from Penns Valley. (Tobias was 6 of 10 for 110 yards, and 2 touchdowns and an interception). Antonio Troese kicked his first of three PATs, to make the score 7-0. A key play on the drive was a 67 yard pass hookup between Clarion teammates John Katis, at quarterback and wide receiver Cody Hearst.

Then, about midway through the second quarter, Bald Eagle Area’s Dakota Bartley, who led all rushers, with 94 yards,  had a nice 59 yard run, setting the North up with a first and goal, at the South nine yard line. After the South held the North out of the endzone on several tries, Slike scored his second touchdown, following some nice blocking up the middle, from a yard out on fourth down. With the PAT, the North led 14-0.

As the half was winding down Clearfield’s Tyler Stratton, the North’s Defensive MVP, came up with one of his three interceptions on the night, which ties the record for most pick offs in a game, setting the North up just short of midfield. Several plays later, with just 35 seconds left in the half, Hearst caught a 13 yard scoring strike, from Tobias. Troese kicked the extra point to make the score 21-0, North at the half. Tobias and Hearst also connected on a 25 yard pass play earlier in the drive. 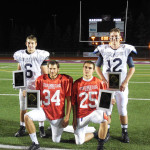 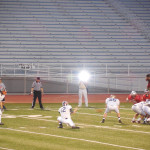 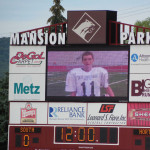 Midway through the third, a high snap flew over the South quarterback’s head and another Bald Eagle player, Bryan Green recovered at the South 11 yard line. After several plays, the North settled for a 31 yard Troese field goal, moving their lead to 24-0, at 6:55.

The South finally found the scoreboard, with 5:52 left in the game, on a four yard pass from Williamsburg’s Austin McMonagle to Brady Moore from Central, who was named the South’s Offensive MVP (John Micheal Maclay from Mifflin County was the South’s Defensive MVP). Altoona’s Joel Reighard kicked the extra point, to set the 24-7 final.

Hearst led all receivers with 106 yards on three receptions. He also had a 15 yard run. He is only the eighth player in the game’s history to have over 100 receiving yards. Slike had 36 rushing yards, on 8 carries.

Katis had the second most yardage among all quarterbacks, with 70 yards on 2 completions on 5 attempts and fellow Bobcat Benton Reichart had a nice game defensively, with several tackles, two of them for losses and a deflected pass from his nose guard slot.

Troese was one of 12 players to receive $500.00 academic scholarships. Troese’s scholarship was courtesy of M&T Bank.

Other members of the Clarion  staff on the sidelines for the North were Todd Smith, Scott Miller, Nate McClaine, Don Skunda, Keith Murtha, Kevin “Fonzi” Slike and ball boy Benny Murtha. Also on the North staff were Tim Janocko from Clearfield, Martin Tobias and Shearer from Penns Valley and Robbie Irwin from Bellefonte.

Some Comments from Bobcats after the game:

Cody Hearst: “This was a really great experience. I think the Bobcats always had great chemistry together. And we only had four days with a new team to build that same chemistry and I think we did a heck of a job doing that. It felt like being around the guys back at home. It was the same exact connections, messing around, all of that.

“It was a great time, a great experience.”

John Katis: “It was fun. Cody, Damien, Ben, Antonio and I had a good time this week, riding up in the van and everything. Getting that last week together, before heading our separate ways and going to school.

Antonio Troese: (on field goal) “That was nice, that was good.”
(on Bobcats scoring all the North points) “That’s awesome. That just shows the talent that we have, at little ol’ Clarion.”

Benton Reichart always a man of few words: (on TFLs) “I guess it was pretty good.”

Offensive Coordinator, Todd Smith: “I’m just proud of all the kids. It was fun to meet other coaches and to meet other players from other teams. It’s the first time I’ve ever coached in an all-star football game and it was neat how the kids came together during the week. (We) started with a bunch of kids from a bunch of different schools and they meshed in to a pretty good football team and that was fun.

“And I was especially proud of our (Clarion) kids. The Clarion kids scored every point tonight. And I think they showed that it doesn’t matter what classification, no matter what, you’re talking about in Pennsylvania, we had some of the top kids this year. I’m just proud, proud of our staff and proud of the kids for how hard they’ve worked.”

Damien Slike: “I had a lot of fun. I scored two touchdowns, that was fun. Meeting a bunch of new kids and we all clicked and tore it up tonight.”

(On Clarion scoring all the North points) “That’s kind of funny to me. I thought about that after the game. That just shows what great coaches we have and what great players come from Clarion… and everywhere else I guess.”

And finally, Coach Wiser: (on the Bobcats’ scoring output) “They did all the scoring. It was awesome.

(Of the rest of the week) “I had a lot of fun this week. I’m proud of my staff and everything they did. I think it was pretty neat the way the kids (from other teams) responded to them (the way our Clarion kids do). It just showed how good a staff we really have.

“I think Nate (McClaine) starting with the offensive line. Those kids loved him and he did a good job, to really prepare them. And Todd (Smith) did a super job, Scooter (Miller) with special teams, Don (Skunda) and Keith (Murtha). We just had one kid with an ankle injury tonight. I just felt bad for that kid (injured player) on the other side of the field (injured player who didn’t finish the game).

“Another thing is: I think a lot of kids had an opportunity to stretch themselves a little bit more as a person. Some kids did some really outstanding things. Having not coached all of them during the year, it’s hard to pick out anything in particular. But that Stratton kid… I hate to start naming one kid after another, but just an outstanding game, an outstanding effort.

“I said the only thing that would have made it a perfect, perfect night for me… (a shutout). Tim Janocko did a nice job coaching the defense and it was a stretch for me just to be the head coach and not be a coordinator and I did it and I survived, emotionally. But I thought I could be the number one cheerleader out there tonight and I hope I did that. (The North defense had seven turnovers in the game.)

“Antonio getting the field goal too. I’m glad to get him some of the things we didn’t get him all season.”

(Congratulations Bobcats on a Super Job!!!!)

Categories
All-StarsFootballSpecial Feature
Back to Top