Kyla Miles has committed to play college volleyball at Mercyhurst University, in Erie.
The versatile Miles was a stellar, three sport athlete at Clarion Area, competing in Volleyball, Basketball and Track with success in all three. She was twice named All-State in Volleyball and the District Nine MVP her senior year. The Lady Cats won the State Class-A Championship her junior year. They won the KSAC and District Nine Titles each of her four years. 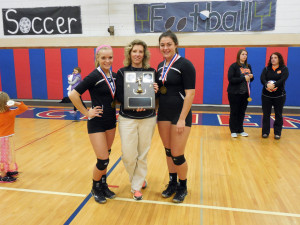 She was a member of two straight District Nine Class-A Championship basketball teams, finishing her career with over 1000 points. She was All-District twice. A listing of many of her accomplishments and awards is at the end of this article.

As to why she chose Mercyhurst, Miles said, “When I visited Mercyhurst, I knew instantly that’s where I wanted to go. The faculty there is incredible in their fields and very supportive of student learning. When I toured the Biology department, the professors were so helpful and kind. Also, the campus is gorgeous and it is a good distance from home.

Mercyhurst Coach Ryan Patton likes what he sees in Miles, both on and off the court. He said, “What first caught my attention with Kyla was her potential to hit a very heavy ball. From there, there were some big time endorsements of her character (which matters as much as anything). Finally, as they become rarer and rarer, I’ve always liked multi-sport athletes.”

Kyla could possibly see the court soon for the Lakers. Coach Patton stated, “Kyla will play opposite (right side) for us. She’ll have lots of opportunities to earn playing time early in her career, but – this is a good thing about our program here and now – it’s hard for people to come in and play right away.

“In time, with lifting and getting her to hit with her whole body instead of just with her arm, she could be real, real good.”

Clarion Area Volleyball Coach, Shari Campbell mentioned that Miles was a great player for the Lady Cats stating that she was a Cornerstone for the 2013 season and that she was excited for Kyla to continue with her volleyball career.

She stated, “Mercyhurst is getting a great offensive player in Kyla who has a lot of versatility. Kyla has been a middle hitter and a right side hitter and can hit a lot of different tempos. Being left handed adds a different dimension also.”

Coach Campbell sees Miles getting even better, stating, “She has a lot more in her. It will be exciting to see how (she continues) to develop over (her) collegiate career.” She also mentioned that Miles has a great work ethic and noted that would be something that her college coaches would value.

As for her studies, Miles said, “I will be majoring in Biology at Mercyhurst. After I get my degree there, I plan to attend Pharmacy school and become a Pharmacist.”

Kyla cherishes the time she spent with the Lady Cats. Speaking fondly of her coaches and teammates she said, “Looking back at my experience with Clarion volleyball, I would never trade all the memories and honors earned for any other team. I can’t thank my Coaches enough! They have taught me so much about the game of volleyball and so many life lessons, that I will carry with me throughout the years. I would not be where I am today without Clarion volleyball and it was an honor to me to be a part of such a great program.”

Miles admits that it took a lot of work to get to where she is today, “ Looking over the past four years of volleyball, it has taken a lot of commitment and dedication, many hours of training on and off season and a desire to set a goal and a commitment to achieve it.”

Miles also gives a special shout out to two very special people in her life, “I would also like to thank my parents (Sid and Debbie Miles) for always supporting me in all my sports and extracurricular activities. You have always been there to encourage me and believe in me, in whatever I decide to take on and I can’t thank you enough!”

(Kyla it has been a pleasure to watch you compete for the Lady Cats! All the best at Mercyhurst!!!!)

Some of Miles’ accomplishments at Clarion Area:

Categories
Special FeatureVolleyball
Back to Top