The Proclamation is in honor of the late Clarion Area High School coaching legend’s induction into the Pennsylvania Scholastic Football Coaches Association (PSFCA) Hall of Fame. 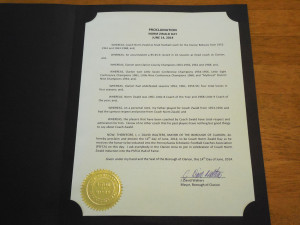 The induction and banquet will take place at 1:00PM, on Saturday, at the Holiday Inn East, in Harrisburg. Later that day, this year’s honorees, including Coach Zwald who also had great success at Ridgway, Ray Reckner (Brockway), William “Muzzy” Colosimo (Greensburg Central Catholic and now at Valley), Joe DeAntona (West Scranton) and Joe Walsh (Henderson, in West Chester) will be introduced in halftime ceremonies at the Big 33 Game (PA – MD).

The Proclamation which will be presented to Coach Zwald’s family, on Saturday, references many of his accomplishments as head coach for the Bobcats. It also mentions the total respect and admiration that the players he mentored had for him, as well as,  something close to home to Mayor Walters, “WHEREAS, on a personal note, my father played for Coach Zwald from 1953-1956 and had the upmost respect and praise from Coach Norm Zwald…”

The proclamation concludes with: “NOW, THEREFORE, I, J. DAVID WALTERS, MAYOR OF THE BOROUGH OF CLARION, do hereby proclaim and declare the 14th day of June, 2014, to be Coach Norm Zwald Day as he receives the honor to be inducted into the Pennsylvania Scholastic Football Coaches Association (PSFCA) on this day. I ask everybody in the Clarion Area to join in celebration of Coach Norm Zwald’s induction into the PSFCA Hall of Fame.