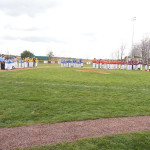 Teams on the field for introductions 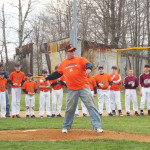 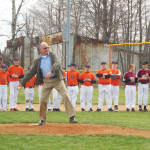 The festivities opened with all the teams lining up on the field. Then, Player Agent, Tom Pore introduced members of each team (players, managers and coaches) by name.

League President, Monica Goheen, who is now in her third year in that post, thanked the umpires for their service. Goheen then presented, Ed Kemmer, who has 25 years of baseball coaching experience, his wife Nancy and other family members, with some gifts. 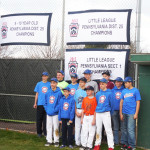 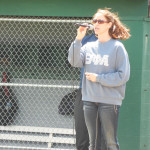 First it was a baseball, signed by Little League members, which the Kemmer’s were asked to give to their son Jon, who plays professional baseball, in the Houston Astros’ organization. John Kemmer, a Clarion Little League and Clarion Area High School alumnis, currently plays for the Quad City River Bandits in Davenport, Iowa. He was a member of the 2013 New York–Penn League Champion, Tri-City ValleyCats from Troy, New York, also an affiliate of the Astros. Then the Kemmer’s were presented with Clarion Little League tee shirts.

Next Ed Kemmer was given the honor of throwing the ceremonial first pitch.

Don Lewis was then honored for his 50 years of service, both as a manager and team sponsor (Don Lewis Contracting and Structural Modulars, Inc.). He was introduced by former players and current coaches, Mike Smith and Mike Lapinto. 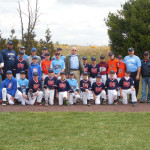 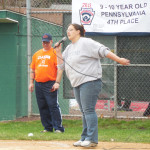 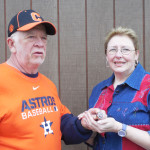 Kenn Staub, Clarion Little League Vice President, then thanked various individuals who help to make the program a success, followed by Erin Lewis who did a beautiful rendition of the National Anthem. Staub is in his seventh year as a coach and board member and third year as Vice President.  The festivities concluded with players and coaches, past and present, who are or were affiliated with Mr. Lewis, on teams he coached or sponsored, being invited to go out to the center field fence for a group photo.

Then it was “Play Ball” for Burns & Burns and Lions.

Categories
BaseballSpecial Feature
Back to Top