Antonio Troese, a key member of the Clarion Area, KSAC Small-School and District Nine Class – A Championship Football Team has decided to continue his football and educational career at Westminster College, in New Wilmington. 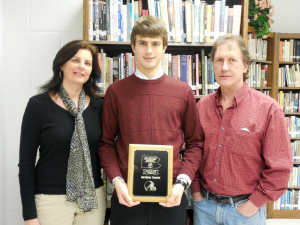 Clarion Bobcat andWestminster Titan football recruit, Antonio Troese, earlier in the school year, with his parents, Jan and Rick Troese, after receiving one of his numerous academic rewards.

Troese was a member of three straight Bobcat Teams to win the KSAC Small School title. Those teams were in the District Nine Championship all three years. Antonio was a defensive back, wide receiver, place kicker for extra points and field goals and quarterback. His versatility was a big factor to his success in high school and was something that wasn’t lost on Westminster coaches, in recruiting Troese.

Clarion head coach Larry Wiser said, “Antonio’s been a three year starter for me at defensive back. He’s so close to John Katis that it almost could have been a flip of the coin for starting quarterback. And John obviously has set all kinds of school records at quarterback. Antonio, in his own right, was an excellent quarterback. He played outstanding at the receiving position, too.

“He’s a smart kid. He’s the first kicker we’ve had since Scott Austin to kick 20 PATs. He set all kind of school records when it came to PATs, scoring records and so forth.” Among Troese’s kicking stats are 138 career PATs.

His versatility may compute to early playing time at Westminster. First year head coach Scott Benzell commented, “In regards to Antonio, since we’re a new staff and we’re taking over, we think there are a lot of opportunities for our young guys to contribute earlier than maybe in other situations. And he’s a guy that from a versatility standpoint we think can find the field for us. He’ll get every opportunity to do that.

“We like the fact that he played in a wing-T, but he was versatile enough to run the football. And I know that he handled some kicking too. So, for us, that was pretty exciting.”

Special teams coordinator, Garrett Clawson, who recruited Troese, had this to say “While I was recruiting Antonio, watching film, I noticed that he is versatile. I like that he can play a multitude of positions, ranging from wide receiver, defensive back, as a specialist in the kicking game. I also saw a little bit of film where he was put in at the quarterback position. It just tells me that he is an athlete.

“That’s one dynamic that I always tell kids, that regardless of what position they play we’re looking for athletes. Especially for myself as a special teams coordinator, I constantly tell my guys that regardless of the role that they play. Whether it’s as a place kicker… or the guy running down on kickoffs, just be an athlete. With that identity as an athlete you can get the job done.

“The thing about Antonio having a 3.8 or 3.9 GPA says a lot about his work ethic, that he’s not a sleeper, that he gets things accomplished. So he’s obviously in the classroom, which is important here.”

Troese is high on the Westminster program and coaching staff, saying, “I chose Westminster because I like the new coaches that are coming in, coming from a D-I program. With the new coaching staff, it definitely gives me an opportunity to play right away. The education there is phenomenal. I like it because of that. I like the location. And the price was a big factor. They were the least expensive of the schools I was considering.

I felt more comfortable there when I went for an overnight visit; it just felt better.

He plans on majoring in Physics and is planning on doing a 3-2 engineering program (where he will complete his masters in 5 years), combining 3 years at Westminster and 2 more at either Penn State or Case Western Reserve University, in Cleveland.

He will join former Bobcat teammates Ian Matson and Brandon Heeter on the Titans’ roster. When asked if that factored into his decision, he said, “I think it did, just having someone there that I know. They can help me through it all. We’re going to be lifting through the summer, with each other. That’ll be nice.”

Troese mentioned a couple of highlights from his days as a Bobcat gridder, “ For me personally, the Union game where I made the two field goals. (Coach) Wiser had the faith in me, to kick those. And the Lakeview game. People were saying that they were bigger than us, they were faster than us. I remember we came out at halftime and there were a bunch of the guys from last year’s team on the Lakeview sideline cheering us on. That really got us going.”

He has high regard for his Clarion coaches and the players’ parents. He stated, “We really couldn’t have asked for a better coaching staff. They work really well together. They made sure we were hard working. They made sure we were dedicated to what we were doing, we weren’t (messing) around or anything. If we were, they made us stop and they just kept us on task and kept us working the whole year.

“The parents going to all the games, sacrificing all the time and money for…”

And of his own parents, Rick and Jan Troese, he said, “I want to thank them for all they’ve done for me, paying for all the equipment that goes into this, driving me to all the practices even from when I was at a young age. Going to all my games, making sure they were there. Just everything that they’ve done.”

Troese had this to say about his Bobcat teammates, “It was really like a brotherhood. We didn’t care who got the ball or anything. We were very unselfish. We got along real well together. That’s what made us great this year. We just had guys that were willing to help each other and put in the time to do what we needed to do.”

Coach Benzell likes what he sees in Troese and others from the area. He commented, “For us, it’s great to have some other guys from that area on the football program. We certainly want to continue to try to do our best to try to recruit guys up there. It seems to be that those guys are extremely hard working and tough guys – the kind of guys that you need on your football team to have success. We certainly look forward to coming back and trying to get more guys out of that area.”

Coach Wiser concluded his comments by saying, “He’s intelligent. I think he’s going to be a great asset to Westminster. I think they are looking at him kicking. Also they are going to give him the opportunity to work in the defensive secondary.

(All the best to Antonio as he embarks on this next phase in his life!!!!)