When you are part of a high school football program that has won the KSAC Small School Title each of the three years you played, been in the District Nine Class-A Title Game each of those years, won the District Championship and made it to the PIAA State Final Four your senior year, while going 34-7 during your career, including 26-2 your final two seasons, winning can get in your blood.

Such is the case for Clarion Bobcat senior, wide receiver and defensive back Cody Hearst, who recently committed to Washington and Jefferson College. In looking at colleges, Hearst wanted to go to a school with strong academics and also a winning football tradition. 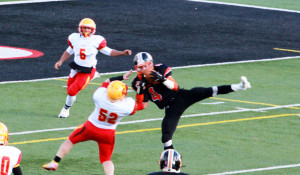 Of his choice of W&J, Hearst said, “I picked Washington and Jefferson mainly because of academics and also because their football team is a winning team, a winning program. That’s what we (Clarion Area) were and that’s what I plan to continue, a winning tradition.”

And the Presidents certainly have a winning tradition, boasting 23 NCAA Playoff appearances, 2 ECAC Titles and 23 Presidents’ Athletic Conference Titles, including this past season.

Hearst had this to say about his new coach, “Coach Sirianni seems like a good coach. He likes winning and that’s what I like. He told me that he can’t stand losing, so I jumped on that. He definitely seems to know what he’s talking about. His brother is the wide receiver coach for the Jets.” 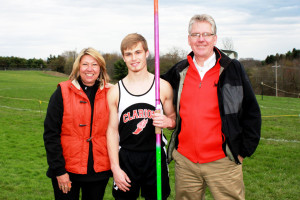 (Photo by G. Chad Thomas) Cody with his parents, Christine and Bill Hearst. An all-around athlete, Cody also participated in track and field and basketball.

Hearst didn’t come by these records by sheer talent alone. Clarion Area Head Coach, Larry Wiser said this of his star receiver, “W&J is getting, not only a great athlete, but a good student (Hearst was a PFN All-State Academic selection the last three seasons).

Plus, on top of that, (he’s) just a great, great kid. When it comes to work ethic, I don’t know of too many athletes I’ve had over the years, that I’ve had to actually shut down in practice and tell them to slow up and then he gives me that mean look, like he was mad at me, ‘Hey Coach, I’m going 100%. You can’t make me go 80% the day before a game.’ ”

And he had quite a lot of help along the way.

“Cam Kirkland (friend and ex-teammate, who had held some of the receiving records and his coach this past season) has definitely helped me a lot. Also Coach Scoot (Scott Miller), just teaching me (with) more than the basics, like what to expect at the college level. He really helped me with that a lot.”

Hearst also had help from someone who played for another KSAC school, Pitt wide receiver and former Keystone Panther, Brent Zuck. Hearst said of Zuck, “I ran routes with him all summer. He played football for Pitt and he helped me with route running and lots of other things, over the summer.”

Of Coach Wiser, Hearst stated, “He’s the one who contacted most of the coaches, toward the end of the season. That really opened up opportunities. I’d definitely like to thank him.”

“Clarion has been calling me lately. But I thought about going down to D III road instead, because of more playing time, hopefully. Juniata, Thiel, Alfred, Westminsterand Lycoming also showed interest.

“He (Coach Sirianni) said if I work hard and I look better than the others, I’m going to play. So, I’m going to work as hard as I can this summer and hopefully I can get some playing time.”

When asked about his top Bobcat Football memory, Hearst answered, “Lakeview (PIAA Quarter-Final) was definitely my favorite game. I had a pretty good game. Made some good key catches and it was a lot of fun winning.”

Anyone else he should thank? “Definitely my parents who supported me through football, paying for everything, cleats, everything like that. And helping pay for college. That’s definitely going to be something big.” 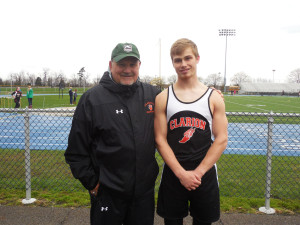 In closing, Hearst said, “I just look forward to hopefully coming back here and watching some more Bobcat games and see that winning tradition survive.”

And Coach Wiser summed up his feelings this way, “We’re going to miss him greatly. I’m excited for him and like I said W& J is getting quite a kid there.”